British singer Adele's new album "25" will not be available for music streaming services, reflecting a heated debate in the industry about how to embrace new formats such as Spotify, Apple Music and Deezer. 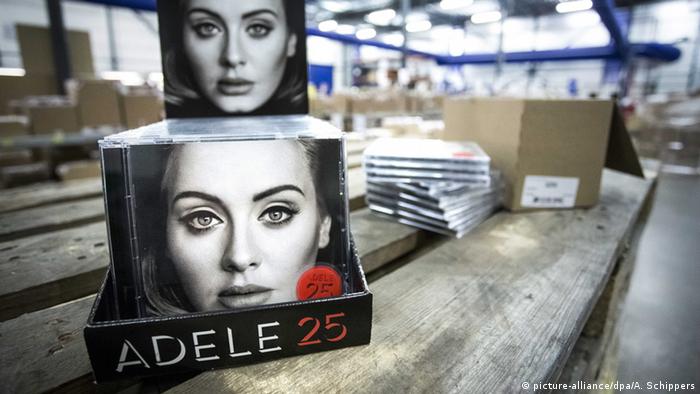 As Adele's much-anticipated album titled "25" was hitting the shelves of music stores across the globe on Friday, music streaming companies are initially missing out on the blockbuster success the British singer is sure to generate.

US tech giant Apple on Thursday confirmed media reports earlier in the week that "25" wouldn't be available to stream on its Apple Music service, adding, however, that it was "thrilled to offer" customers the opportunity to buy the new album on its online iTunes store.

Spotify also confirmed that its subscribers would not have access to Adele's new album.

Tyler Goldman, North America chief executive of music streaming company Deezer, likewise said the service would not offer "25" at present. In a company statement he's quoted as saying: "She's using this as an opportunity to try and sell more CD's or downloads. If all artists did this, we wouldn't have the growth in subscriptions we have."

Streaming: The Future of the Music Industry

Streaming: The future of the music industry?

Adele's music, like that of follow elite artists Taylor Swift and Beyoncé, is in sufficiently high demand that she can sell millions of albums on CD or via downloads. That gives these superstars the market power enabling them to decide how their music is released. By streaming their new songs immediately, they would risk those lucrative post-release sales, which in the case of Adele's previous album "21" amounted to 30 million copies worldwide.

According to Billboard magazine, "25" is expected to sell more than 1 million units in North America in its first week, and will very likely be the biggest album release of 2015.

Casey Rae, chief executive of Future of Music Coalition, told the New York Times that Adele's decision to withhold the new album on streaming for a certain period of time was sending a "strong signal to other artists." However, in reality not all artists are able to make those same choices, he added.

In the past decade, the music industry has seen a seismic shift away from CD sales which declined by 80 percent toward music streaming that now makes up 32 percent of annual revenue. New services like Apple Music, Spotify and Deezer, however, remain deeply disputed because critics say they don't pay a fair share of their revenue to artists.

Deezer CEO Tyler Goldman told the news agency Reuters that Taylor Swift's move to withhold her "1989" album, for example, didn't have a financial impact for streaming services, and neither would Adele's. "One individual artist is not going to change the inevitability of streaming," he said.

British singer Adele has smashed download records. Her comeback, "Hello," sold more than 1.1 million downloads in its first week, becoming the first song to break the 1 million mark on the Billboard charts. (03.11.2015)

Artist revenues on music streaming services (US-$ per play)