German police have tracked down a rare 1985 Ferrari after a supposed buyer sped off with it during a test drive. The suspect remains on the run. The vehicle once belonged to British racing driver Eddie Irvine. 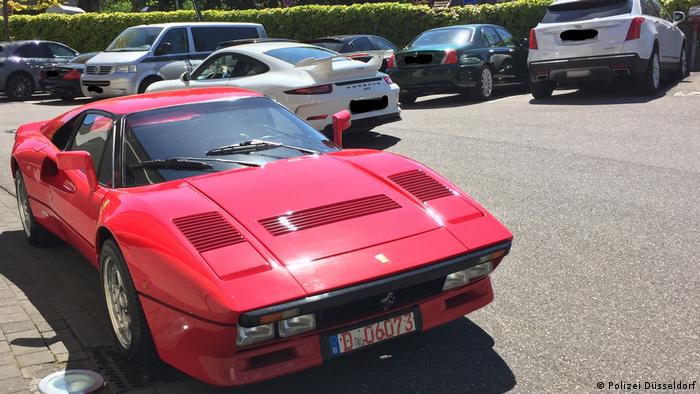 German authorities found the Ferrari 288 GTO worth around €2 million ($2.2 million) after it was stolen by a would-be buyer, police said on Wednesday.

The police in the northwest city of Düsseldorf said they were still searching for the perpetrator and urged the public for more information.

The man, posing as a classic car buyer, had responded to an advertisement for the 1985 racing car and arranged to meet the owner for a test drive.

During the drive, they decided to swap seats so the would-be buyer could take charge of the red GTO. Once in the driver's seat — and with the seller standing on the sidewalk — the man sped off leaving the startled owner behind.

Vanished without a trace

A police search has so far been without success, despite the seller taking a photo of the man when they first met.

The lookalike Ferrari 308 GTS was the car of choice for 1980s private investigator Thomas Magnum in the TV series Magnum, P.I. The Italian racing car was also featured in other classic TV shows and movies, such as Miami Vice, James Bond's Golden Eye and Ferris Bueller's Day Off.

The dog was prowling for food in the kitchen while its 36-year-old owner was not looking. Firefighters put the fire out quickly and treated three people for smoke inhalation. (30.04.2019)

A teenager in southwestern Germany set a four-story house on fire when she decided to blow-dry her mattress to warm it up. More than a hundred firefighters were called to the scene. (27.12.2018)