Steinmeier Calls for International Probe Into Georgia Conflict | Europe | News and current affairs from around the continent | DW | 05.09.2008

German Foreign Minister Frank-Walter Steinmeier has called for an international probe into the conflict over Georgia's breakaway provinces in an interview published Friday. 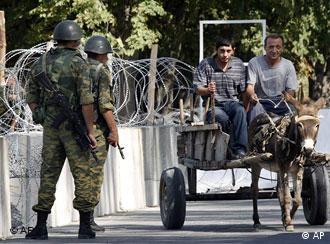 Russian soldiers at a checkpoint in the Georgian city of Gori

It was necessary to examine the background of the brief war last month when Russian troops entered South Ossetia and penetrated further into Georgia, Steinmeier told the daily Hannoversche Allgemeine Zeitung on Friday, Sept. 5.

"The question of who bears guilt and responsibility is not the priority when people are suffering, have lost their possessions and are forced to flee," he said. "But I have also said that in a second phase, in which we will define our medium and long-term relations with the conflicting parties, the issue of who bears what part of the responsibility for the escalation to the point of a military conflict will play a role.

"This cannot be cleared up overnight and probably never completely," the foreign minister told the newspaper.

He acknowledged the conflict had had an impact on relations between the EU and Russia and would have long-term repercussions for the West's foreign policy, but called for ties to be improved.

"A return to the patterns of the Cold War is not an attractive alternative to the laborious undertaking of returning to an ordered way of doing business," he said. 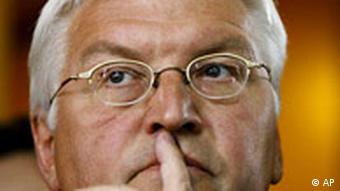 Neither Georgia nor Russia has backed an inquiry into last month's five-day violent conflict.

But Steinmeier urged both countries to support the work of an independent team of investigators with military expertise.

"I advise both sides to open themselves to an independent investigation," Steinmeier said. "I see no lack of institutions, for example in the framework of the UN or the OSCE that could run the probe, he said. "But until now, there has above all been unwillingness on both sides to take part in such an investigation."

The OSCE said Thursday it had dispatched a first round of military observers in a buffer zone between Russian and Georgian troops.

The observers were on patrol near the separatist province of South Ossetia in Georgia "for the first time since the outbreak of hostilities in Georgia last month," the Organization for Security and Co-operation in Europe said in a statement on its Web site.

Russia has said it will only pull troops out of the buffer zone once international controls, including military observers and police, are in place in the area and once Georgia signs a non-aggression pact.

Russia's foreign ministry on Thursday said the subject of sending military observers and police to the buffer zone was discussed by Deputy Russian Foreign Minister Vladimir Titov and US Ambassador to Moscow John Beyrle in Moscow.

Meanwhile, US Vice President Dick Cheney during a visit to Georgia on Thursday accused Russia of an "illegitimate" invasion aimed at redrawing the map of Georgia and said the crisis had damaged Russia's international reputation.

"Russia's actions have cast grave doubt on Russia's intentions and on its reliability as an international partner, not just in Georgia but across this region and indeed across the international system," Cheney said. 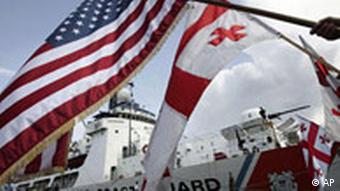 The US is a staunch ally of Georgia

Russia's move strengthened the need to bring the former Soviet Republic and other countries into the NATO alliance, the White House had said Thursday.

"The desire to bring these new countries, these new democracies, and these countries that want to live in freedom and help defend each other, is even strengthened by the past month's activities," spokeswoman Dana Perino said.

Russia strongly objects to continued NATO expansion and the alliance's announcement at an April summit that it intends to invite Georgia and Ukraine, another former Soviet state, to join.

"Our support of Georgia's entry into NATO started long before any of these hostilities began," Perino said.

In the aftermath of Russia's invasion of Georgia, EU leaders have vowed to make reconstruction aid available to Tbilisi and to send observers to monitor the ceasefire agreement and troop withdrawal. (02.09.2008)

The Ukraine crisis, which has been brewing for years, does not come as surprise. But President Vladimir Putin's actions stem from more than just Russian trauma, writes Jörg Himmelreich.