Until 1989, it was the Stasi's job to spy on East German citizens. The office of Erich Mielke, who led the secret police for more than 30 years, has been restored for a new exhibition on the body's dark past. 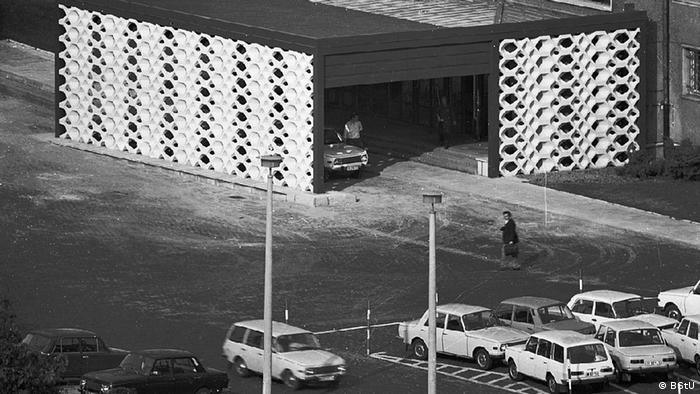 Erich Mielke, who headed up East Germany's Ministry for State Security from 1957 to 1989, clearly liked to surround himself with colorful things.

The carpet in his former office at the Stasi headquarters in Berlin is fire-engine red. His desk chair is a bright blue, and off in a corner, a comfortable-looking armchair shares the same striking hue.

Perhaps the colorful environment helped Mielke concentrate on his work - a job that was solely concerned with a black and white ideology.

The newly restored office is part of a new exhibition "Feind ist, wer anders denkt" ("The enemy is he who thinks differently").

'The enemy is he who thinks differently' 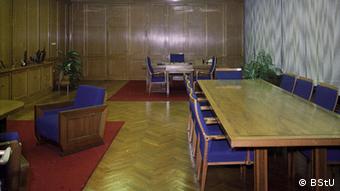 Mielke's office was a splash of color in a dark world

All this could not have gone on show had it not been for a group of courageous men and women who stormed the Stasi headquarters at "Haus 1" 22 years ago on January 15, 1990.

They saved millions of documents from being destroyed and preserved important pieces of furniture from Mielke's office.

It was their hard work that helped ensure the old ministry quickly became a memorial site after the GDR's peaceful revolution of the previous year.

The group formed a private initiative known as the "Antistalinistische Aktion" ("Anti-Stalinist Action" - ASTAK), and in the last two decades has presented exhibitions, released publications and organized events with eyewitnesses to history.

However, Mielke's office itself was out of bounds until recently. For one, it was in a dangerous state of disrepair. But ASTAK had also found itself in a dispute over the future of the building with the federal government. Eventually, it was agreed that the private initiative and other associations of Stasi victims would be allowed to run Haus 1. 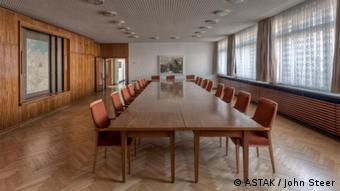 GDR citizens helped save the Stasi files and furniture

The German state has invested about 11 million euros ($14 million) to renovate and repair the building. It fixed the roof, insulated walls and ceilings and retrofitted barrier-free access to the building.

Haus 1 is now technically modern - but conservationists have helped protect its historical look.

Next to Mielke's office, visitors can see an original telephone system replete with a red alarm button and a direct line to the "ZK" - the "Zentralkomitee" - the Central Committee of the ruling Socialist Unity Party ("Sozialistische Einheitspartei Deutschlands" - SED).

The offices feature electric typewriters that were built in the GDR, such as the Robotron 202.

There is also a large television made by the Dutch firm Philips. It would have been impossible for normal GDR citizens to have afforded one like it. Mielke is certain to have used his to watch West German TV shows, which were otherwise banned. Seen from the West, the dark brown box would have appeared as a museum piece even back 1989 when the Berlin Wall fell. 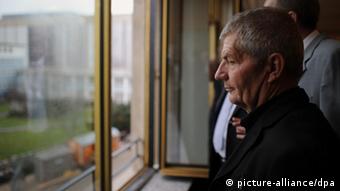 Away from Mielke's office, the exhibition highlights the lives of some of the people whose fate rested in his hands.

Famous cases include the expulsion of the songwriter Wolf Biermann. That case inspired the then student and artist Gabriele Stötzer to protest against the East German dictatorship, and with it, the secret police. She paid the price with a year in prison.

Then there is the case of Roland Jahn, a former journalist from Thuringia, who in 2011 was appointed as the new federal commissioner for the management of Stasi files by the German parliament.

Now that Haus 1 and its surrounding buildings have been renovated, Jahn would like it to become a campus of democracy.

"The more we understand dictatorship, the better we will construct democracy," said Jahn as he viewed the renovated headquarters last week.

They were once a place of horror, but are slowly becoming a site of historical and political education.

Twenty years after Germany opened the former East Germany's secret police files, the extent of the country's internal espionage is still astonishing. Some were shocked by what they found, others relieved. (02.01.2012)

The commissioner for the Stasi archives, former East German dissident Roland Jahn, takes stock of the agency's work 20 years after it was founded. He spoke to Mario Dobovisek of public radio station Deutschlandfunk. (29.12.2011)

Former Stasi employees to be banned from working at Stasi archive

Germany's government has agreed to ban former Stasi employees from working in the body which archives records from the former East German secret police. The planned change has been backed by the director of the authority. (12.09.2011)