Former Stasi employees to be banned from working at Stasi archive | Germany| News and in-depth reporting from Berlin and beyond | DW | 12.09.2011

Former Stasi employees to be banned from working at Stasi archive

The German government has agreed to ban former Stasi employees from working in the body which archives records from the former East German secret police. The planned change was backed by the director of the authority. 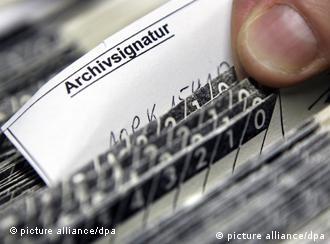 The law relating to the records of the State Security Service (Stasi) of the former German Democratic Republic is to be amended, the cultural spokesman for Germany's Free Democratic Party said on Monday.

Reiner Deutschmann told the regional daily Mitteldeutsche Zeitung that Germany's governing coalition had agreed to add a clause dictating that former Stasi employees are unable to work for the authority that now administers the files compiled by Communist East Germany's secret police.

Under the new law, "anyone who officially or unofficially worked for the Stasi is not allowed to work for the authority," Deutschmann told the paper.

It would also retrospectively apply to the 47 former Stasi workers currently working at the archive.

According to Mitteldeutsche Zeitung, the federal commissioner of the authority, Roland Jahn, has joined the Christian Democratic Union and FDP in advocating this change to the 1991 Stasi Records Act. Since taking the helm in March, Jahn has questioned the continued employment of former Stasi workers, claiming it undermines the credibility of the authority.

After several failed attempts at encouraging the employees to leave voluntarily, Jahn commissioned a report into the legality of their employment by the Berlin lawyer Johannes Weberling.

In the report published in July, Weberling recommend a change in the law, with the proviso that the former Stasi employees currently in the agency should be provided with "equivalent jobs [elsewhere] in the federal administration." 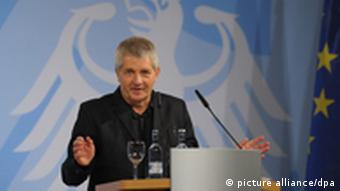 But the proposed change hasn't been universally welcomed. Wolfgang Thierse, vice-president of the German parliament, told Mitteldeutsche Zeitung that he believed that a retrospective change in the law was "legally problematic."

Social Democrat Thierse was one of the first inhabitants of the former GDR to take up a high-ranking position in reunified German politics.

"You can't retrospectively dissolve an employment relationship," Wieland said. "This is nonsense."

"The law is there to determine how the files are administered," he added.

The German government already has plans in place for an additional change to the law, allowing investigations into the possible Stasi past of senior public service workers to be extended until 2019.

At its peak, the East German secret police force employed around 274,000 people with an estimated 500,000 working as unpaid informers monitoring suspected enemies of the former communist German Democratic Republic.

Half a century after the Berlin Wall went up, more information is coming to light about how East German espionage affected West Germany. (07.08.2011)

Marianne Birthler, the head of the agency that oversees the archives holding millions of files collected by the former East German secret police, says many files remain untouched. (26.05.2009)