J.J. Abrams and producer Kathleen Kennedy revealed the title of the final installment in the flagship saga. Fans immediately began speculating about the meaning of the cryptic title. 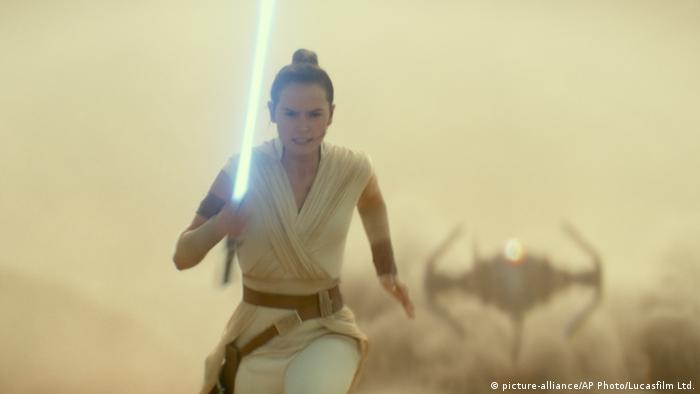 Disney and Lucasfilm announced on Friday that the last installment in the flagship Star Wars series will be called "The Rise of Skywalker." The first teaser for Episode IX was also released at a special convention called Star Wars Celebration in Chicago.

The clip and title were revealed during a panel discussion featuring members of the cast, Lucasfilm president Kathleen Kennedy, and director J.J. Abrams.

Abrams also directed the first installment of the sequel trilogy, 2015's "The Force Awakens." Colin Trevorrow, best known for writing and directing "Jurassic World," was originally slated to direct but left in 2018 due to creative differences. According to the Wall Street Journal, Kennedy was reportedly unhappy with his script for the film.

The trailer featured all the main characters of the new trilogy, as well as several throwbacks to the original 1970s and 80s film, including the much-anticipated return of actor Billy Dee Williams as Lando Calrissian. The footage also features the voice of Mark Hamill as Luke Skywalker, who died in the previous film, the late star Carrie Fisher as General Leia Organa, and as some sharp-eared listeners pointed out on social media, what sounds like the long-gone Emperor Palpatine's laughter at the end.

Fans immediately took to Twitter to debate whether the title means that Daisy Ridley's character Rey is actually a member of the Skywalker family, or if it means that Adam Driver's villain Kylo Ren, the son of Leia and Han Solo, will switch sides.

Like the previous two films, "The Rise of Skywalker" will be released in cinemas in December.

Speaking in Chicago, Abrams told fans that "The movie doesn't pick up immediately after the last film. Some time has gone by."

"This is an adventure that the group goes on together."

Disney has announced that after the release of Episode IX, there will be a significant break before it releases another Star Wars film. This is likely because of the tepid reception to last year's "Solo: A Star Wars Story," when many fans claimed they were feeling fatigued with the franchise.

'Star Wars: The Last Jedi': the best episode yet

Fans had to wait two years for it. The eighth Star Wars episode hits movie theaters right on time for Christmas. This much can be said, without spoilers: It is already celebrated as the very best one. (12.12.2017)

Frontex suspends operations in Hungary over asylum system 4h ago

Controversial Polish abortion law to go into effect 5h ago