This weekend marks the 300th anniversary of the founding of St. Petersburg. As Russia’s second city celebrates, some 40 of the world’s top leaders will meet for the first time since falling out over the Iraq war. 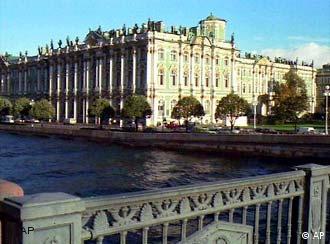 Many of St. Petersburg's top landmarks including the world-famous Hermitage Museum have been extensively restored.

Call it the summit before the summit. Only days before the leaders of the Group of Eight (G8) countries come together in Evian, France, Russian President Vladimir Putin will host the largest gathering of heads of state in his hometown St. Petersburg since czarist times.

Founded in 1703 by Peter the Great to be Russia's window to the Western world, St. Petersburg sprouted from the marshy Baltic Sea coast to become arguably the country’s prettiest city. In preparation for the three-day birthday celebrations, Russia was spent around $1.5 billion to restore buildings and infrastructure.

While some critics say the money could have been better spent elsewhere, others contend most of the work has been superficial in nature, such as a fresh coat of paint over a rotting facade. That could easily be metaphor for the happy handshakes and smiles of the world leaders, who still have yet to overcome lingering animosity following the Iraq war.

Blair, Chirac and Schröder will all arrive on Friday, but Bush will join them on Saturday for a posh dinner at the Peterhof palace. Putin and Bush will then hold bilateral talks on Sunday morning before heading off to Evian.

Much will be inferred from Bush’s every move while in Europe, since speculation emerged that Washington planned to treat each member of the anti-war coalition differently. Some observers say the motto of U.S. national security advisor Condoleezza Rice is: “forgive the Russians, ignore the Germans and punish the French.”

“We will see (Bush) give Chirac and Schröder the cold shoulder,” predicted Ivo Daalder, a political analyst with the Washington-based think tank Brookings Institution last week.

Schröder will not meet privately with Bush despite having no contact with one another since late last year. Bush feels Schröder used anti-U.S. sentiment to help get himself reelected last September. The chancellor has since tried in vain to establish extensive personal contact with the president. 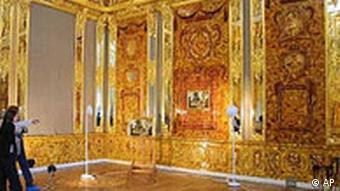 The Amber Room in the Catherine Palace in Tsarskoye Selo outside St.Petersburg.

“The president has understanding for honest policy disagreements," Rice said on Wednesday. "But no one understands if things take on an anti-American tinge."

With little movement expected on U.S.-German relations, Schröder instead will have to will concentrate on the cultural aspects of his visit to St. Petersburg. One highlight will be the official reopening of the “Amber Room”, an ornate reconstruction of the baroque masterpiece once given to Russia by Prussia in 1717.

The room disappeared during World War II after it was stolen by the German army. In a symbol of reconciliation between the countries, much of the reconstruction was funded by German donations.

The rebuilt Amber Room, known to Germans and Russians as the “Eighth Wonder of the World,” reopens near St. Petersburg in its entirety on Tuesday. The actual masterpiece has been lost without a trace since 1945. (May 13, 2003)

Divided G8 to Put Aside Differences Over Iraq at Evian Summit

Heads of the world's eight leading industrialized nations meet on June 1 in the French spa town of Evian for the annual G8 summit with an ambitious agenda and hopes of transatlantic reconciliation. (May 30, 2003)