S!sters to enter the fray as Germany's Eurovision candidate in Tel Aviv

The double act of Carlotta and Laurita took Germany's top Eurovision honors with their pop song "Sister," coming on out top among the seven acts representing a diversity of styles. 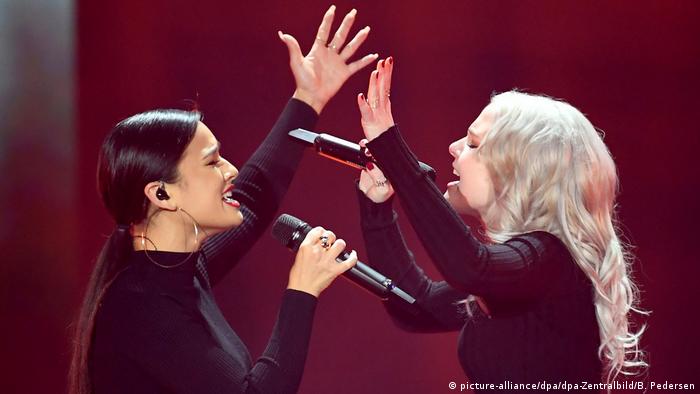 "We're going to have to get some rest and have a good cry," said Carlotta of S!sters after their victory was announced on Friday. Both she and her duo partner, Laurita, jumped breathlessly on the stage of the Adlershof television studios in Berlin, holding up an Israeli flag before giving a repeat performance of their song.

It was a giggling rendition, but the voices emerged strong and blended well again, both performers exuberant. Carlotta, who has also performed with the German rock band Revolverheld, described the song "Sister" as "a very authentic and powerful kind of pop."

Had they thought they would win? "Not in the least," said Laurita, "We wished it of course, but it was really just a dream." Added Carlotta: "You wish it so much that it's a fantasy, and then when you actually win, you can't realize it because that fantasy is still in your head."

Their entry had been the last of seven in the final on February 22 selecting Germany's candidate to the Eurovision Song Contest in Tel Aviv in May. 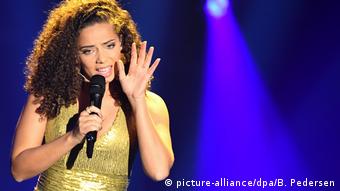 Makeda nearly made it to the top - but not quite

Both Carlotta Truman, 19, who comes from a German-British family in Hanover and Laurita Spinelli, 26, half-Filipino from Wiesbaden, grew up in musical families.

Singing in a children's choir at age eight, Carlotta went on to win the German Rock & Pop Prize as Best Solo Singer at age 12. Regularly performing with her band Carlotta & The Truman Show, she writes songs in German and English and is the youngest student at the Music College in Hanover.

After finishing school, Laurita toured with the TV casting show "The Voice of Germany" and has worked as a background vocalist for pop divas Sarah Connor, Stefanie Heinzmann and Lena. Laurita is currently composing and producing songs for her first album.

The show had an emotional beginning when last year's German candidate Michael Schulte gave a repeat performance of his song "You Let Me Walk Alone," which placed fourth in last year's contest in Lisbon. After that, Schulte had been celebrated in Germany as though he'd won. 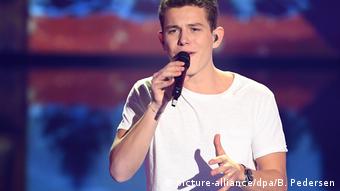 Some in the jury voted for Gregor Hägele, but his overall ranking was weak in the end

It was a break in years of ESC misery for Germany, often landing on the lower rungs and twice at very bottom. Credit was given, apart from Schulte and his song, to the elaborate selection process for last year's Germany ESC nationals.

Not wanting to break with a winning routine, North German Broadcasting and its head of entertainment Thomas Schreiber retained that selection process this year, the first time in years that the organizers did not find themselves desperately seeking a new recipe for success.

The candidate was selected in equal parts by a 20-member jury of European music professionals, a second jury numbering 100 and representing the "music taste in Europe" – whatever that is – and thirdly, the television audience voting in their favorite via telephone or text message. 375,000 votes were cast by the TV audience.

The process seems to offer an answer to the question that plagues dozens of countries and hundreds of millions of viewers every year: what is important at the Eurovision Song Contest: quality of composition, appearance, musicality, singing, momentary audience taste, mainstream appeal, charisma, craziness or some other standout quality — or some combination of all of the above? 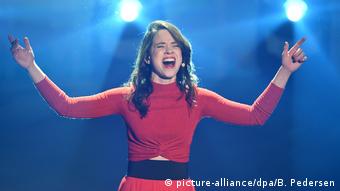 In the field of contenders, Carlotta and Laurita were the last to be added to the ESC assembly line: After the song had been written, the two singers were then found to fit. About girls quarreling and reconciling, that song carries a message of friendship and maturity. The songwriting team of Laurell Barker, Marine Kaltenbacher, Tom Oehler and Thomas Stengaard has already chalked up ESC successes: Barker, from Canada, is a co-author of three of this year's Eurovision entries in Tel Aviv, and Stengaard participated in the creation of Michael Schulte's successful song in 2018.

The show otherwise featured performances by German rock veteran Udo Lindenberg, who joined up with singer Andreas Bourani, as well as appearances by onetime ESC winner Lena Meyer-Landrut and the rock band Revolverheld.

Gregor Hägele was first with "Let Me Go," a song he wrote with three others at the ESC songwriting camp, where an international lineup of songwriters offered their advice. His soul voice reached its limits on the high notes though and ended up just slightly off-pitch.

Aly Ryan was up next with "Wear Your Love" and electro beats. She advertised herself as "different," but that quality wasn't evident in her song. Her standout feature seemed to be the geometric light patterns projected onto her dress.

Makeda, a singer with a German father and a mother from Trinidad and Tobago, sang "The Day I Loved You," her characteristic voice marked by a strong tremolo. Delivering her sensitive soul ballad impeccably, she stood out for her soft tones and yielded vigorous applause and positive commentary from veteran German ESC TV host Peter Urban and Michael Schulte in the control room. Makeda came in a strong second. 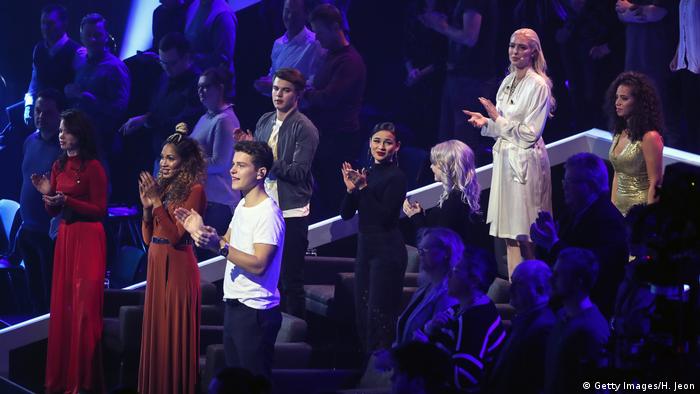 All the candidates in the green room

Then followed another female solo act: with "Demons," BB Thomaz – also of mixed heritage (German-American) – delivered a strange mix of styles, the song shifting abruptly from one style to another as though it were two diverse songs pressed into one, with unclear and jarring tonality.

Lilly Among Clouds entered the fray with "Surprise" and a Kate Bush-esque performance. Linus Bruhn, who in younger years played Boy Tarzan onstage, delivered an unremarkable song named "Our City" but was a jury favorite, before S!sters came onstage to render their eponymous song.

The jury of music professionals delivered their top ratings to a variety of candidates, but Makeda emerged as a favorite with them before being edged out by S!sters.

S!sters will face some stiff competition in Tel Aviv. Australia is delegating Kate Miller-Heidke, an opera singer. "Zero Gravity" is a heavily produced pop song that has the vocalist employing her voice in dizzying heights. It's already being celebrated by ESC fans, as is the pop ballad of Michael Rice from Great Britain.

France will send 19-year-old Bilal Hassani, a YouTube star. In his song "Roi" (King), he demands, in French and English, respect as a gay man and the right to live his life as he wants to. After his coming out, the young man of Moroccan descent was subjected to cyber mobbing and even death threats.

Allessandro Mahmoud is on his way to Tel Aviv, but not all Italians are pleased. Even senior politicians commented on the choice: Italian Interior Minister Matteo Salvini, head of the rightist populist Lega Nord, complained about Mahmoud on Twitter. Many Italians seem irritated by the singer's ethnic background: his father Egyptian, his mother from Sardinia. The jury simply acknowledged his musical strengths: good voice, good song arrangement.

The Russian superstar wants to put himself to the test again: Sergey Lazarev's spectacular show three years ago in Stockholm landed him in third place. Leaving nothing to chance, Russia is backing him up with a tried-and-true songwriting team with ESC experience. 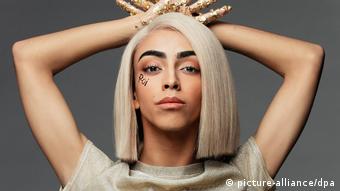 After Conchita - Bilal? A distinctive performer and a symbol of diversity

Latvia is sending in a soft folk song: the Duo Carousel is to delight the sensation-seeking ESC audience for three minutes with the quiet acoustical ballad "That Night." Altogether, the show on May 18 in Tel Aviv promises a wide diversity of acts.

All 42 candidates known on March 9

Among the countries choosing their candidates on March 9 is Sweden, which has placed in the top ten 40 times in the 63-year ESC history and has won six of those seasons. Germany has taken the top honors twice: with Nicole in 1982 and "Ein bisschen Frieden" and in 2010 with Meyer-Landrut and "Satellite".

Who will sing for Germany at the Eurovision Song Contest?

"Our Song for Israel" is the national final that will select who will represent Germany at the Eurovision Song Contest 2019. Seven young acts are competing to perform at the popular event. (21.02.2019)

Adele, Beyoncé, Ed Sheeran — they've all been accused of plagiarism. As decades-long cases like Kraftwerk vs. Pelham continue in the courts, people are asking: how is litigation affecting musical creativity? (02.01.2019)

Millions around the world watched as Netta of Israel claimed victory at the Eurovision Song Contest. A dynamo in a kimono, she delivered a message that fitted the Eurovision theme of diversity. (13.05.2018)