Spanish island generates its own clean energy | Environment | All topics from climate change to conservation | DW | 18.11.2014

An island in the Canaries has developed a unique system to produce all the electricity it needs. The combination of wind and hydro power provides seamless energy, saves Spain money, and acts as a model for the future. 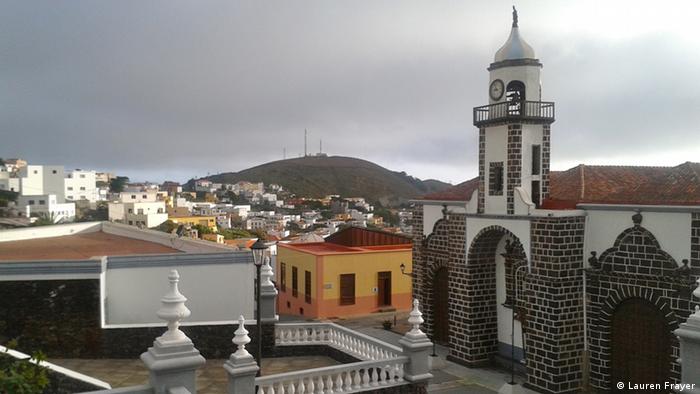 The irony is that it actually takes quite a lot of fossil fuel to reach the tiny island of El Hierro, population 10,000. You'd need to catch at least one commercial flight, then a propeller plane or a ferry to reach the remote outpost 1,000 kilometers from the European mainland in the Atlantic Ocean. It's the last land Christopher Columbus saw before reaching the New World.

The island is part of the Canary Islands and belongs to Spain, although it takes about a 12-hour journey to get there from the Iberian Peninsula. That's the same voyage barges of diesel fuel had to make before the island's shift to renewable energy. The seabed around the active volcanic island is too volatile, and the water too deep, for undersea electricity lines. The only way the island got its power was by shipping in about 6,600 tons of diesel fuel by boat each year - an expensive and dirty endeavor.

El Hierro now bills itself as world's first self-sufficient island in terms of energy. To power the island, it's transitioned from fossil fuels to 100 percent renewable energy, thanks to a mix of wind and hydro power. 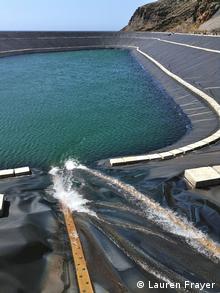 Wind turbines harness the Canary Islands' Atlantic gusts. When production exceeds demand - such as at night, for example - excess energy is used to pump water from a sea-level tank into a natural crater half a mile uphill on El Hierro's volcano. When the wind dies down, the water is released through a turbine to generate more power.

Other islands have similarly managed to become energy independent, such as the tiny self-governing island of Tokelau in the South Pacific, and the Danish island, Samso. But whereas these have done so with the help of having previously been hooked up to a power grid, El Hierro made the change in isolation.

The centerpiece of El Hierro has long been a massive rocky volcano at the island's center. Now, it's dotted with five huge wind turbines that provide the entire island's electricity, about 48 gigawatt hours.

"They're 64 meters high. So just getting them onto the island and up this mountain was a logistical nightmare!" laughs engineer Juan Manuel Quintero, who sits on the board of the Gorona del Viento power plant. "They were split into three parts that each arrived at different ports. We had to widen the road to get them through!"

Everything is connected with sensors, so that within five seconds of the wind dying down, the hydro part of the plant kicks in. For residents, the lights don't even flicker.

It's a relatively simple system that requires only two engineers to monitor it around-the-clock. Quintero described it as a unique system.

"It's been done separately, but no one's ever combined water and wind," Quintero said. The wind machines and water turbines were purchased pre-made, he added. "The innovation we made is hooking up the two systems together." 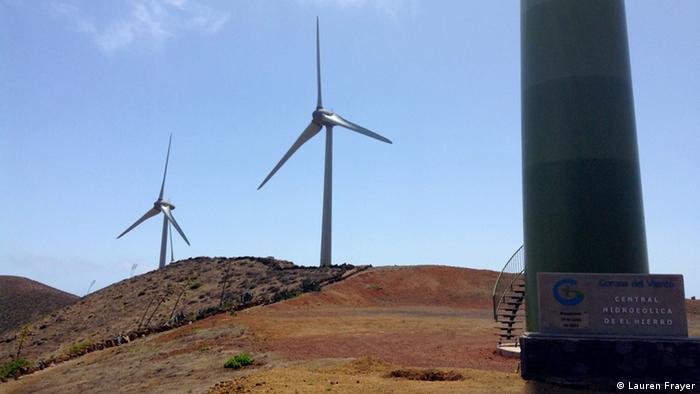 Just five massive turbines provide most of the island's power

An investment in the future

The Spanish government, a local university and a Spanish power company helped fund the project, with a total investment of 90 million euros ($113 million).

The Gorona del Viento power station was one of the last projects Spain approved before the economic crisis prompted the government to halt all of its subsidies for renewable energy, two years ago.

El Hierro's governor, Alpidio Armas, says that El Hierro has seen increasing emigration. People born in El Hierro are spread all over Europe and the Americas, where they've traveled in search of jobs or a better life, away from the windy, harsh outpost. But now, the governor hopes this new power station could bring people back - and make them proud of their island.

"When they turn on the light, they think of the windmills moving and maybe they think, 'We are different than the rest of the world, because we are catching electricity for these windmills and not from conventional engines,'" Armas said.

Most current residents of El Hierro appear to approve of the power plant, though it doesn't lower their electricity bills. Prices for power are still set at a national level for all of Spain, no matter the source of the energy. But by cutting diesel deliveries, the Spanish government saves nearly 2 million euros a year - even after factoring in costs to build and maintain the plant.

And the new power scheme has given this isolated island some energy security - perhaps forever.

"How much will be the price for oil in 20 years time? We don't know! But we are sure that we will still have wind in the Canary Islands in 20 years time," said Gonzalo Escribano, an energy economist at Madrid's Elcano Royal Institute. "And the price, or the cost to generate an additional gigawatt, will be zero, just very small costs for maintenance."

El Hierro has halted consumption of some 40,000 barrels of oil each year. That's more than 20,000 tons of carbon dioxide that are not being released into the atmosphere.

But officials on El Hierro won't leave it at that. The island's governor is looking ahead, and wants to have all the island's cars be electric by the year 2020.

Fracking could prolong Germany's supply of fossil fuels and make the country less dependent on imports, says the gas industry. But experts argue over whether it's worth the risk to people's health and the environment. (31.10.2014)

A city assembly in Japan has given the green light for the restart of a nuclear power plant. It paves the way for the resumption of nuclear energy generation next year, following the 2011 Fukushima disaster. (28.10.2014)