As part of its disarmament, Basque separatist group ETA has given French authorities a list of hidden weapon caches containing 120 firearms and three tonnes of explosives. Madrid has rejected demands for amnesty. 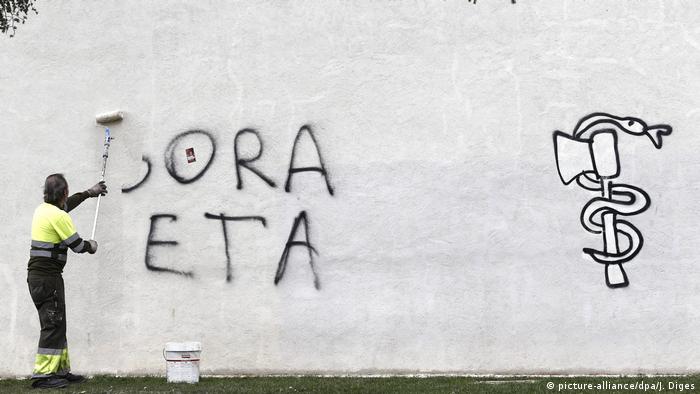 The Spanish militant group ETA handed over its remaining declared arms and explosives to members of "civil society," effectively meeting a Saturday deadline.

Known for its targeted assassinations and demands for an independent state in northern Spain and southwest France, ETA gave French authorities the locations of arms caches on Saturday as part of its final weapons transfer in the French city of Bayonne.

Eight caches of weapons containing 120 firearms and three tonnes of explosives were on the list of sites in the Pyrenees-Atlantiques department handed to the French authorities, according to Michel Tubiana, a human-rights lawyer who is a member of a group acting as intermediary in the handover.

French Interior Minister Matthias Fekl described the disarmament process as a "great step" towards peace and security in Europe.

ETA formed in 1959 in response to late Spanish dictator Francisco Franco's repression of Basques, but its violent campaign emerged in 1968 with the killing of a policeman.

Since then, the separatist group killed more than 850 people, including the assassination of Franco's heir apparent Luis Carrero Blanco in 1973 by digging a tunnel under the road he drove down for daily Mass and filling it with explosives.

ETA formally announced an indefinite ceasefire in 2011. However, the disarmament process marks the end of the group's bloody campaign to establish an independent state.

Although the group has decided to disarm, it has yet to announce that it would dissolve, prompting suspicions from the Spanish government, which has rejected ETA's demands for amnesty or improved prison conditions for jailed members.

"It will not reap any political advantage or profit," said Spain's Culture Minister Inigo Mendez de Vigo, who also serves as a government spokesman.

"May it disarm, may it dissolve, may it ask forgiveness and help to clear up the crimes which have not been resolved," he added. Bayonne city hall in south west France is the setting for the orchestrated handover on Saturday of ETA's information on its arms cashes.

Despite the disarmament, ETA's actions have left a bitter rift across Spain, in part due to its bomb attacks which left hundreds of civilians dead.

A petition "against impunity" for the group's members gathered more than 15,000 signatures within 24 hours after European Parliament member Maite Pagazaurtundua, whose brother was killed in an ETA attack, backed it.

"The ETA we've known up to now has gone forever," Semper said. "What remains to be done it to wipe out the hatred that ETA embedded in a large of Basque society."