Pro-independence Catalonians want to open a permanent dialogue with Madrid in order to hold an official independence vote. If the Spanish government refuses, they will go ahead anyway, Catalan leader Artur Mas says. 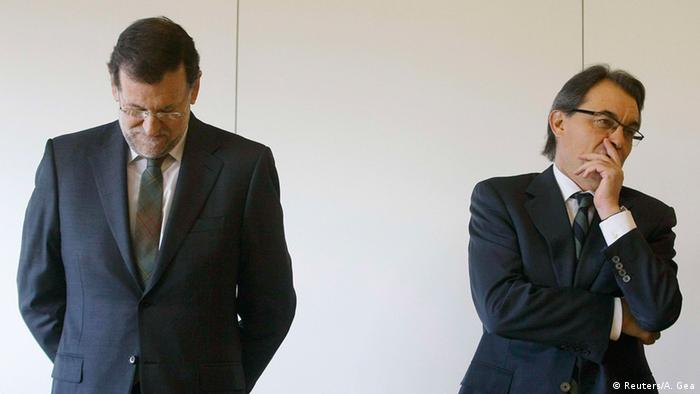 On Tuesday, Artur Mas (right in photo), the head of Catalonia's government, called on Spanish Prime Minister Mariano Rajoy (left) to establish a permanent dialogue with the semiautonomous region, threatening to move up local elections and use them as a proxy for a more official secession referendum if Madrid did not comply.

Mas told reporters that the dialogue should focus on how Catalonia could hold an official referendum on independence. Sunday's poll had been highly unofficial, with courts blocking a more formal referendum and the city government of Barcelona refusing to assist by setting up polling stations.

If the national government does not make steps toward further autonomy for Catalonia or take measures to ensure that the wealthy northeastern region, which accounts for one-fifth of Spain's GDP, enjoys more financial freedom from the federal state, Mas will make sure that regional elections, scheduled for late 2016, are brought forward and held as soon as possible.

"We're willing to use this tool if there is not a positive answer from the Spanish government," Mas said, according to the news agency Reuters. "I have an obligation to open the door to dialogue with Mariano Rajoy but if it doesn't work, we will follow our roadmap."

If local elections are held sooner, Convergence and Union (CiU), led by Mas, could try for an absolute majority, which the party lacks now, giving it more room to pave the way for independence.

The Spanish government is having none of it, however: "The right to self-determination that you demand is not possible, neither under our constitution nor in any of the other democracies around us," Deputy Prime Minister Soraya Saenz de Santamaria told a Catalan nationalist lawmaker in parliament on Tuesday.

Mas also spoke on Tuesday of a cyberattack during Sunday's poll, according to the news agency AFP, saying "they tried to take down the Catalan government's computer systems," though he did not specify who he thought "they" could be.

"Never before had we suffered an organized attack of such scale and characteristics," he said, adding that the onslaught could have disrupted medical services. He said he did not believe that the assault could have been the work of a few amateurs.

The pro-independence Catalan National Assembly also reported to AFP that it had had its phones jammed on Sunday.

Mas plans to meet with other parties in favor of secession this week in an effort to create a united platform for the anticipated official referendum.

Spanish prosecutors have said they will decide on Wednesday whether to bring charges against Mas for allowing the referendum.