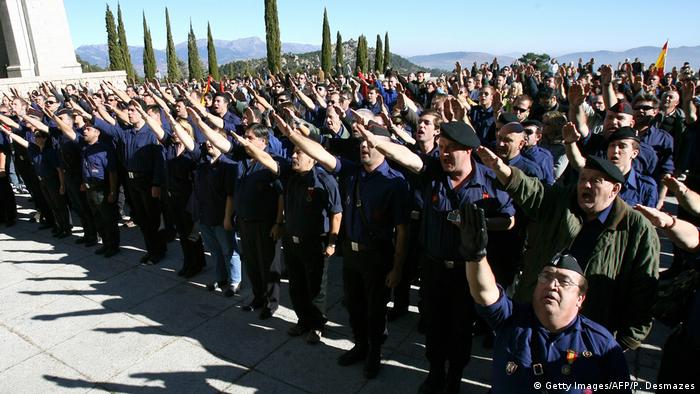 Spain's justice minister on Wednesday presented Congress with the new socialist government's plan to revive and expand state initiatives that would support the victims of dictator Francisco Franco, as well as make organizations honoring the dead dictator illegal.

The series of reforms to Spain's 2007 Historical Memory Law, the first legislation to condemn Franco's repressive regime following his death in 1975, return the controversy over Spain's authoritarian past to the political forefront. The country was riven by his rule and has struggled to reach a national consensus on the dictator's legacy and recognize victims of his regime. 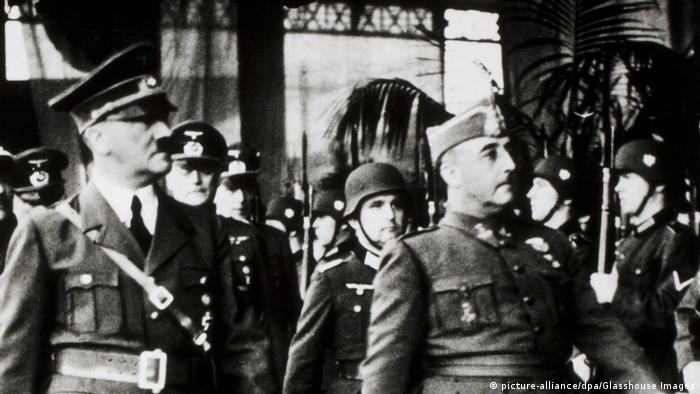 Franco (R) was a political ally of Hitler (L)

A key element of the reform will provide state funding to exhume the remains of Franco's unidentified victims from mass graves, Justice Minister Dolores Delgado said. 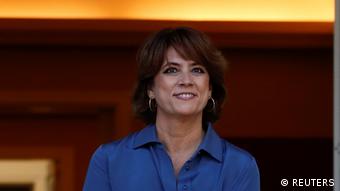 Dolores Delgado has been Spain's justice minister since June

"It is unacceptable that Spain continues to be second in the world after Cambodia in terms of the number of disappeared people," she said, adding that victims' families should not have their attempts to recover their relatives' remains blocked by judges or local authorities.

According to the ministry, around 1,200 mass graves have yet to be opened. The graves contain victims of the Spanish Civil War (1936-1939), when Franco's nationalist-Catholic military forces defeated a left-wing republican coalition.

While exhumations had previously been undertaken by victims associations with state subsidies, the former government of conservative Prime Minister Mariano Rajoy cut off all such funding.

The Office of Support for the Victims of Francoism would be reopened, she also announced.

Wednesday's reform announcement by Delgado, a minister in the new government of Socialist Pedro Sanchez, reverses the policies of the ousted conservative government, following a pattern where the political left supports working through Spain's dictatorial past, and the right wants to let the past rest so as to avoid opening social wounds.

Other related initiatives highlighted included archival access and reparations for Franco victims' relatives, the public release of exhumation information, an official census of Franco's victims from the Civil War through his death, and the annulment of sentences issued by Francoist tribunals.

"To speak of memory is to speak of justice," the minister said. 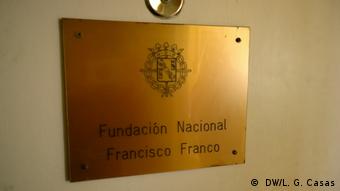 Delgado also said that Spain's government was studying how to make "associations or organizations that defend Francoism" illegal.

One example is the National Francisco Franco Foundation, founded in 1976 with the goal of "spreading and promoting the study and knowledge of the life, the thoughts, the legacy and the works" of the dictator. According to the group's website, it last received state funding in 2003 in order to digitize Franco's archive. It currently receives tax breaks under Spanish law. 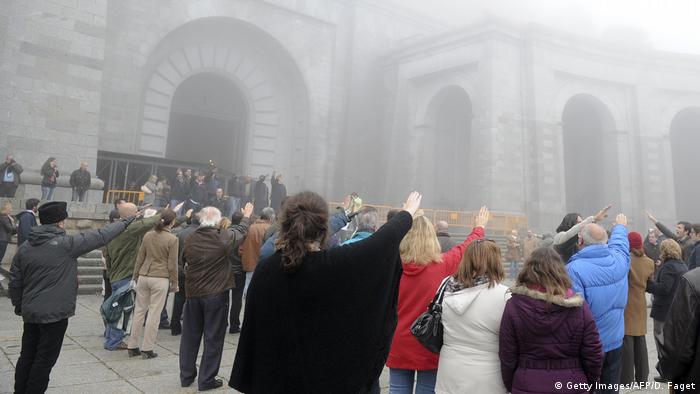 Franco supporters still come to the Valley of the Fallen to honor Franco. Above, they make the fascist salute outside the mausoleum.

The foundation's website contains articles and essays that praise the dictator and play down the extent of his violent repression. It also puts fresh flowers every day on Franco's tomb in the controversial memorial outside Madrid known as the Valley of the Fallen.

Sanchez has promised to remove Franco's remains from the monument.

Delgado said Wednesday that the towering cross that holds the remains of more than 30,000 Spaniards who died in the Civil War would be given a new significance.

Symbols honoring Franco and the Civil War would also be removed, she added.

Ines Madrigal is pursuing justice after realizing she was one of thousands of babies stolen during the Franco era. It's the first time such a case has actually made it to court. (26.06.2018)