The monumental trial of Spanish judge Baltasar Garzon for abuse of power has created yet another milestone in Spain: the first testimony in a court of law of war crimes committed under former dictator Francisco Franco. 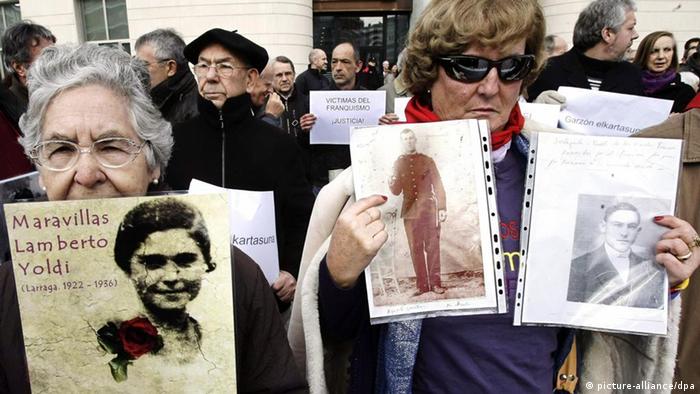 The trial was a milestone for relatives of victims of Franco

A Spanish court on Wednesday heard accounts of atrocities committed during the 1936-1939 civil war for the first time in history, as the trial of prominent judge and human rights advocate Baltasar Garzon continued.

Maria Martin, 81, told the court in a faint voice about his mother's capture and killing by troops loyal to Gen. Francisco Franco in 1936, when she was six years old.

"They took her out of the house and took her away," Martin said. "They released her to testify in court, but then on the way they killed her. They killed 27 men and three women."

Martin said her family has been fighting to recover her mother's body since then. She showed reporters after her testimony a hand-drawn map of where she suspects the body lies in a mass grave.

"Until the day he died in 1977 my father wrote to the local authorities to try to recover the body," she said. "They told him: 'Go away, leave us in peace or we will do to you what we did to her.'" 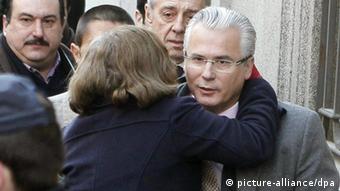 Because of an immunity law passed in 1977 during Spain's transition to democracy, military and government officials accused of crimes under Franco's rule have been legally untouchable. For that reason, Martin's court testimony was a milestone in efforts by relatives of Franco victims who have been seeking justice for their loved ones.

Garzon, who has made headlines for pursuing international human rights cases against figures like Osama bin Laden and Chilean ex-dictator Augusto Pinochet, began Spain's first official investigation into Franco-era atrocities in 2008. The crimes include the deaths or disappearances of more than 100,000 people since the civil war.

Garzon's current trial, one of three against him, was initiated by two right-wing organizations. They accuse him of overstepping his judicial authority by disregarding the immunity law and starting the criminal probe.

Convictions in any of the three cases would effectively end Garzon's career as a judge in Spain. He denies all the charges against him, and his supporters have labeled them as an effort to silence a champion of human rights.

Spanish judge back in the dock over Franco probe

Judge Baltasar Garzon, a famed champion of human rights in Spain, is on trial over his divisive attempt to investigate atrocities committed under the former regime of General Francisco Franco. (24.01.2012)

Celebrated Spanish judge goes on trial for abuse of power

Spanish judge Baltasar Garzon has made a name for himself for pursuing international cases against human rights violations. Now he faces his own day in court in a case that could end his judicial career. (17.01.2012)

The descendants of victims of the Spanish Civil War may finally be about to see justice done after an Argentine judge opens a case into war-time murders and human rights abuses. (29.10.2010)

US sanctions Russian research institute over suspicious malware 4h ago