Spain has followed Germany in summoning the US ambassador to Madrid to discuss allegations of spying on Spanish citizens. Like Berlin, Madrid says the claims could have a significant impact on trans-Atlantic trust. 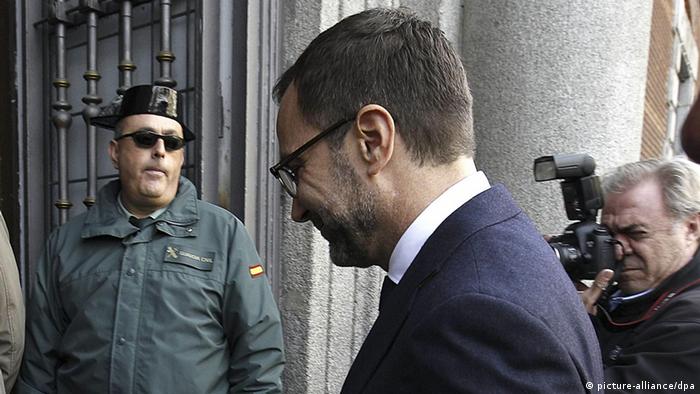 The Spanish government summoned US ambassador James Costos on Monday to discuss allegations that the National Security Agency (NSA) had tracked more than 60 million phone calls in Spain within the space of a single month.

Costos was asked to explain the US position by Spain's Minister for European Affairs Inigo Mendez de Vigo. The minister questioned Costos for some 40 minutes, the Spanish government said, with Madrid issuing him with a message.

"Spain has conveyed to the United States the importance of preserving the climate of trust that governs bilateral relations and [the importance] of knowing the scale of some practices that, if true, are inappropriate and unacceptable between countries that are partners and friends," said the Spanish Foreign Ministry in a press release.

The claims were published in the right-of-center Spanish daily newspaper El Mundo, which said the NSA had recorded the origin and destination of the calls and their duration but not the content.

The paper printed a classified graph that showed 30 days of call tracing up to January 8 this year. The number of monitored calls peaked at 3.5 million on December 11.

German media reported at weekend that spying on Merkel's cell-phone may have started in 2002, three years before she even became chancellor.

The Bild am Sonntag newspaper quoted US intelligence sources as saying that Obama knew about the phone tap on Merkel, having been informed by NSA chief General Keith Alexander in 2010. This was flatly denied by an NSA spokesperson.

Germany last Wednesday summoned US Ambassador to Berlin John B. Emerson to answer questions about the allegations.

France last week demanded an explanation of a report the US had mined millions of French phone records, also summoning the US ambassador.

Paris and Berlin have said they will seek talks with the US to reach an agreement about the conduct of intelligence gathering among allies by the end of the year.