Tens of thousands of people have been killed and millions displaced in the five-year civil war. Previous ceasefires and peace deals have broken down. 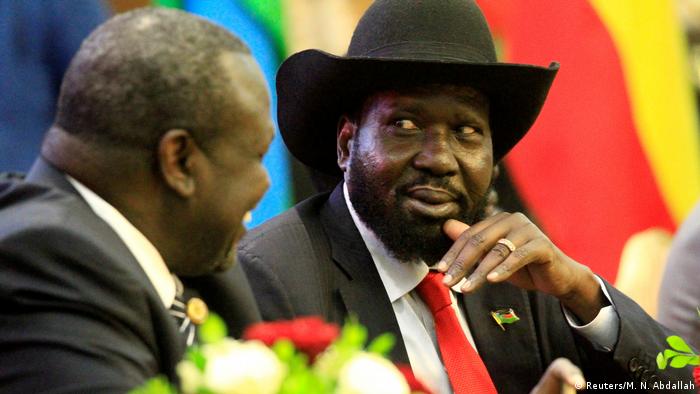 Machar had earlier this week hesitated to agree to the deal reached earlier this month with his arch-rival, President Salva Kiir, who already signed it.

But the rebel leader went ahead with the deal on Thursday after receiving assurances that outstanding issues over state power sharing and the constitution would be addressed.

"By signing this document today, we have reached the conclusion of these negotiations, which consisted of two rounds, one about the outstanding issues and the other on the subsequent issues," Sudanese Foreign Minister Al-Dirdiri Mohamed Ahmed told reporters.

Sudan has been the main mediator in the conflict, which has killed tens of thousands of people and displaced nearly one-third of the country's 13 million people.

"The final signing of the peace deal will happen at a summit of IGAD," Ahmed added, referring to an East African trade bloc. A date for the summit will be announced later.

Previous ceasefires and peace agreements between Kiir and rebels have broken down.

Under the terms of the peace deal reached earlier this month, Machar will become the first of five vice presidents in a transitional government until elections are held.

South Sudan descended into civil war in 2013 two years after it gained independence after Kiir accused Machar, then vice president, of orchestrating a coup attempt.

The conflict is fueled by ethnic disputes, personal rivalries and access to oil resources.

After decades of civil war, South Sudan has been named one of the worst places to be a child. Education, food and security are all difficult to access. DW speaks to Save the Children. (02.08.2018)

After initially refusing to do so, rebel leader Riek Machar said he would sign the deal to end the country's brutal civil war. Machar will return to government as one of South Sudan's vice presidents. (29.08.2018)