A group of lawmakers from South Korea's ruling Saenuri Party has left to form a new party. The party infighting is another blow to impeached President Park Geun-hye. 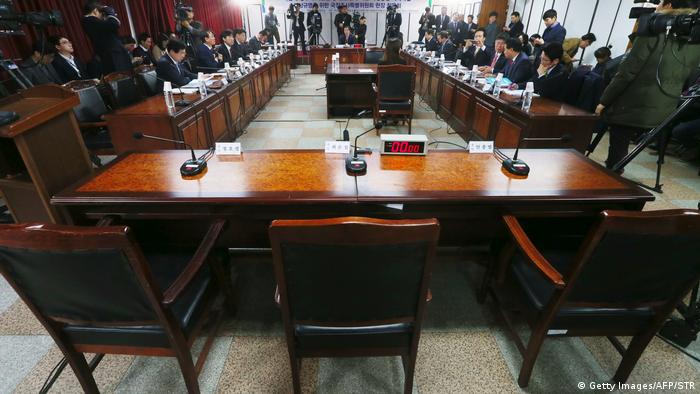 The protests come as investigators questioned a jailed friend of President Park at the center of a widening scandal. Protestors want Park to step down following her impeachment earlier this month. (24.12.2016)

The trial of the "Rasputin" of South Korea has begun in Seoul. Choi Soon-sil is accused of far-reaching political corruption. (19.12.2016)

Outgoing UN secretary general Ban benefits from being away from the scandals that have plagued Korean politics and a reputation for being clean. But is he strong enough to reunite the nation? Julian Ryall reports. (20.12.2016)

The group sharply criticized loyalists of the impeached president, who is embroiled in a widening corruption and influence peddling scandal involving her longtime friend Choi Soon Sil.

"Park loyalists have forgotten the true values of conservatism, which has resulted in the loss of the people's trust. Their loyalty to the president and ignorance of the people's voice and truth allowed Choi Soon-sil to meddle in state affairs," the group said in a statement carried by Yonhap news agency.

Parliament voted to impeach Park earlier this month over allegations that she granted Choi influence over government affairs despite her having no official position. Choi is also accused of extorting money and favors from some of South Korea's largest businesses, including Samsung.

The Constitutional Court now has to review the case to decide whether to impeach Park, whose responsibilities have been handed over Prime Minister Hwang Kyo Ahn.

The party infighting is likely to cause to more defections as mass protests continue calling for Park to step down immediately. Of 300 lawmakers, 234 voted to impeach Park, meaning some members of the Saenuri Party voted against her.

Political analysts have suggested the new conservative party may attract outgoing UN Secretary-General Ban Ki-moon, who has flirted with entering politics in his native South Korea.

A final Constitutional Court ruling would trigger new elections and conservatives are keen to preserve their power amid a loss of confidence in the Saenuri Party. Recent polls place Ban ahead of liberal politician Moon Jae-in.