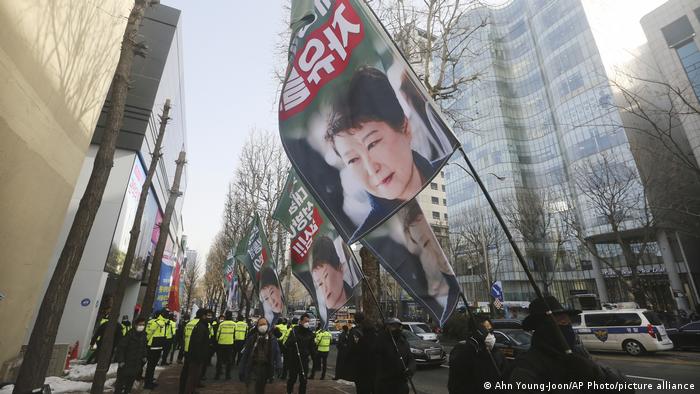 South Korea’s Justice Ministry said on Friday that former President Park Geun-hye had been pardoned. Park had been imprisoned over corruption charges.

Her predecessor, Lee Myung-bak, also serving a jail term for corruption charges, has not been pardoned.

Why was Park pardoned?

"We should move into a new era by getting over the pains of the past. It's time to boldly pull together all our strengths for the future rather than fighting against each other while being preoccupied with the past,'' President Moon Jae-in said in a statement.

"In the case of former President Park, we considered the fact that her health condition has deteriorated a lot after serving nearly five years in prison,'' he said.

Park has been hospitalized three times this year due to chronic shoulder and lower back pain, which was taken into account in amnesty deliberations. In a statement released by lawyer Yoo Young-ha, Park thanked Moon for the pardon and said she would be concentrating on her health.

Supporters and politicians of the opposition People Power party had been calling for Park’s pardon ahead of the March presidential election.

Lee Jae-myung of the ruling Democratic Party and People Power's Yoon Suk-yeol are seen neck and neck in recent polls.

Why was Park jailed?

Park Geun-hye was serving a 20-year jail term, upheld in January this year by the country's top court, for corruption after a sprawling scandal that forced her out of office in 2017.

She was found guilty of colluding with her confidant, Choi Soon-sil, to receive tens of billions of won from major conglomerates.

Park was accused of giving Choi, who held no official post, too much access to government business and of helping her extort top companies.

Park was also indicted on charges of illegally taking funds that were diverted from the budget of South Korea's intelligence agency.

The scandal prompted months of massive protests in the street. It also led to the arrest of the heads of two conglomerates, including Samsung Electronics.

A poll by Gallup Korea in November showed 48% of respondents were opposed to pardoning Park and Lee, down from 60% earlier this year.

Why South Korean culture is a global hit

From K-pop to the Netflix series "Squid Game" and the Oscar success "Parasite," South Korea's pop culture is conquering the world. What makes it so appealing?