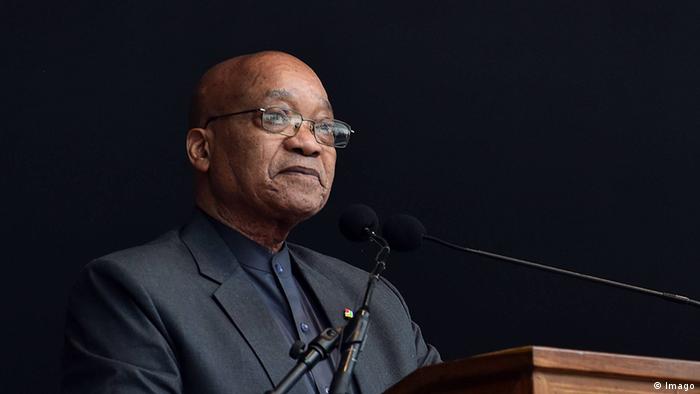 Baleka Mbete told reporters on Sunday that the opposition move by the Democratic Alliance (DA) would be debated on Tuesday.

"The national assembly will on Tuesday, 5 April, consider a motion by the Democratic Alliance for the removal of the President in terms of section 89 of the constitution," Mbete said.

The DA is pushing for Zuma to be impeached after the Constitutional Court ruled on Thursday that he had "failed to uphold, defend and respect the constitution" in ignoring the ombudswoman's directives to repay a portion of public funds used to upgrade his private residence - a property valued at some $24 million (21 million euros). Zuma added a swimming pool and a cattle enclosure but wrote them off as necessary "security" measures.

The court ordered Zuma to repay $14.6 million to the public coffers.

After long denying that he had done anything wrong, Zuma apologized for the transgression, the latest in a series of scandals to hit his presidency. But he has so far refused to step down.

Calls to stand down

The announcement on Sunday came a day after lifelong rights activist and former Mandela adviser Ahmed Kathrada reiterated the growing number of calls for Zuma to leave South Africa's government.

"Today I appeal to our president to submit to the will of the people and resign," Kathrada said in an open letter published by local media.

"I know that if I were in the president's shoes, I would step down with immediate effect," the 86-year-old wrote.

Referring to the ruling African National Congress (ANC) party - of which Zuma is currently head and Kathrada is a long-time member - the former anti-Apartheid activist added that the president should be aware that his "outstanding contribution to the liberation struggle stands to be severely tarnished if the remainder of [his] term as president continues to be dogged by crises and a growing public loss of confidence in the ANC and government as a whole."

Zuma's financial scandals are regarded by some as a signal of how widespread corruption has become within the ANC, which has ruled since South Africa's first free elections in 1994.