High school students in South Africa have held protests in two schools protesting racism. They are questioning what is wrong with having African natural hair in class. 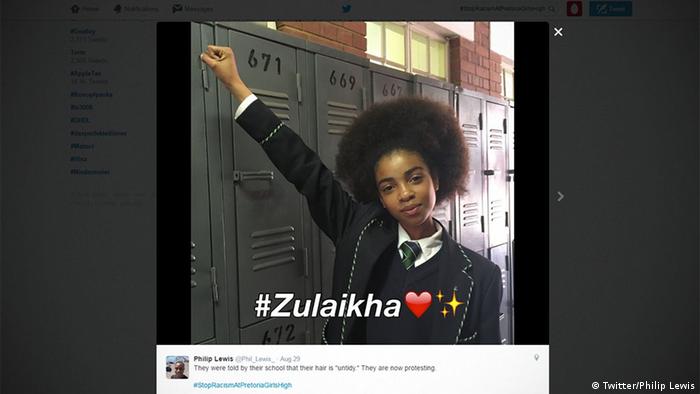 Students at Lawson Brown High School protested on Tuesday morning after they were allegedly told that they would not be allowed to sit for their exams if they had an afro.

The protests come barely a week after students at Pretoria Girls High marched on the school's premises after they were also allegedly ordered to straighten their hair, speak only English and not congregate on the school grounds. The girls called for the school’s headmistress and governing bodies to take swift action to change these rules. Nandi, a former student at the school, told DW that speaking a different language other than English was looked down on. "For example at break, or even in class, all the black students sit together, speak their local language and they [the authorities] say that it’s a township mentality."

It wasn’t long before users took to Twitter to protest against this, using the #StopRacismAtPretoriaGirlsHigh. An online petition was launched and collected over 15,000 signatures within 24 hours.

Speaking to DW, Koketso Moeti, the campaign’s creator, said the petition was also going offline as students from the University of Pretoria organized a solidarity march in front of the school. She explained, "For us it’s important to show that there is bigger solidarity outside of the school, to be able to say to the school that while these learners are speaking out we will not tolerate any form of victimization of the learners." She said the petition sent a clear message to the school that the learners were not alone.

To have an afro or not?

African hair has been a political topic for a long time and has often been referred to as shaggy and unkempt in its natural state. But many see African hair as a symbol of rebellion. In Kenya, for instance, dreadlocks were worn by freedom fighters. However, beauty standards left over from colonial times are still being used to make school policies and standards in the corporate world. The students in Pretoria Girls High School sparked a conversation on beauty standards for African girls.

Moeti further says that the conversation around hair and speaking African languages has been going on for a long time. "In different points in history, girls have organized around it but for the first time it’s coming to the fore in such a way," she said.

Many women in Africa have conformed to Eurocentric standards of beauty that, for example, place women with straight hair at an advantage in the corporate world. But strong chemicals used to straighten African hair have been shown to enter the body through the scalp. They can upset the internal chemical balance and lead to complications. But many say this has been a small price to pay.

Rose Mukwevo, a student in Pretoria, said she felt coerced to change who she was. The implied message to straighten her hair violated her human rights. "Why must I be changed because someone else’s opinion says I must be changed? It represents my blackness. It represents who I am as a black human being," She said.

During the apartheid era, the South African government performed a pencil test. If an individual could hold a pencil in their hair when they shook their head, then that person could not be classified as white. Now, the girls in Pretoria Girls and Lawson Brown high schools are told they cannot wear their African hair in an afro.

Many think that these rules are not just about hair and are unearthing underlying issues which continue to plague young African girls and boys. Nathi Mthethwa, the minister of arts and culture, joined in the discussion, saying it is unacceptable to ban students from speaking their African languages at school.

Later on Tuesday, news agency AFP reported that local education authorities had given Pretoria High School for Girls 21 days to reassess its rules.