A painting by Italian artist Amedeo Modigliani has become the most valuable work ever sold at Sotheby's. Sales have spiked in recent months as private buyers and new galleries enhance their collections. 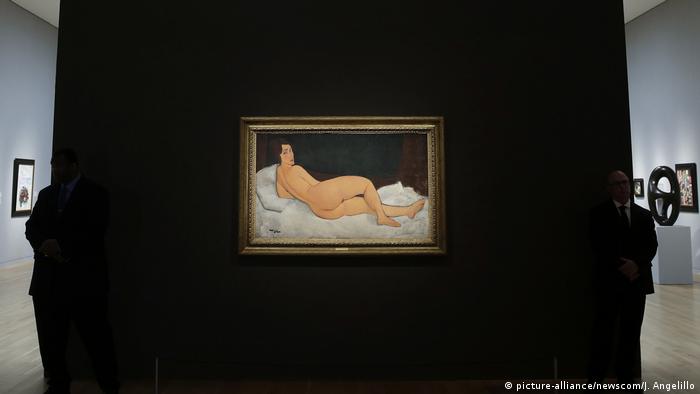 Amedeo Modigliani's female nude "Nu couché (sur le côté gauche)" (Nude lying on her left side) caused a stir when it was first shown in Paris in 1917; police had to close the exhibition. On Monday night in New York it was sold for $157 million (€131 million), to an unknown buyer.

Reflecting on the buoyant market, Sotheby's Simon Shaw said: "It's a masterpiece-driven market, collectors are increasingly good at differentiating the best from the rest and this is an A+ piece from an A-class artist."

The Italian artist is credited with having reinvented the painting of nude models for the Modern era and it is his largest work.

A contemporary of Picasso, Modigliani was not very successful during his lifetime and died aged 35 in Paris in January 1920. Most of his other reclining nudes are in US museums, including the Guggenheim, MoMa and the Met.

Also sold on Monday evening, Picasso's "Le Repos," went under the hammer for $40 million, one of 11 of his works on offer. Claude Monet's "Matinee sur la Seine"  brought in $20.6 million. Edvard Munch's "Summer Night" and Georgia O'Keeffe's "Lake George with White Birch" each raised over $11 million.

The millions raised in Sotheby's sale brought auction house total sales over the last two weeks to well over a billion dollars.

A series of online sales and auctions of a thousand objects from the Rockefeller family has concluded at Christie's. A collective estimate of $600 million for the works was exceeded as the lots brought in a total of $832 million. Various items were on offer, ranging from the Sevres porcelain set taken by French Emperor Napoleon into exile on the island of Elba, which went for $1.8 million after an estimate of $250,000, to $84.7 million for Claude Monet’s water lilies "Nymphéas en fleur" (1914–17) and $80.8 million for Henri Matisse's "Odalisque."

Picasso's "Young Girl With Basket of Flowers" sold at Christie's last week for $115 million as part of the Rockefeller sale.

While very high, no individual work has yet attracted a price similar to the $450 million paid for Leonardo Da Vinci's "Salvator Mundi" at Christie's in New York last November. It is believed now to be the property of Abu Dhabi's department of culture and tourism and is expected to go on show at the Louvre Abu Dhabi.

Before Da Vinci took top spot for the world's most highly priced art work, Picasso's 1955 "Women of Algiers (Version O)", was sold at Christie's for $179.4 million in 2015 in New York. It now occupies second place on the world high-price list with with another Modigliani nude, "Nu couché (Reclining Nude)" sold by Christie's in 2015 for $170 million, one notch behind it.

A giant 59.6-carat gem named the "Pink Star" has set a new world record price for any diamond after it sold for $71.2 million at a Sotheby's auction house. The winning bid came from the Chow Tai Fook jewelry group. (04.04.2017)