Police in Mexico say the sons of jailed drug lord Joaquin "El Chapo" Guzman were likely behind a grenade attack that killed five soldiers in the country's north. They believe the ambush aimed to free a captured suspect. 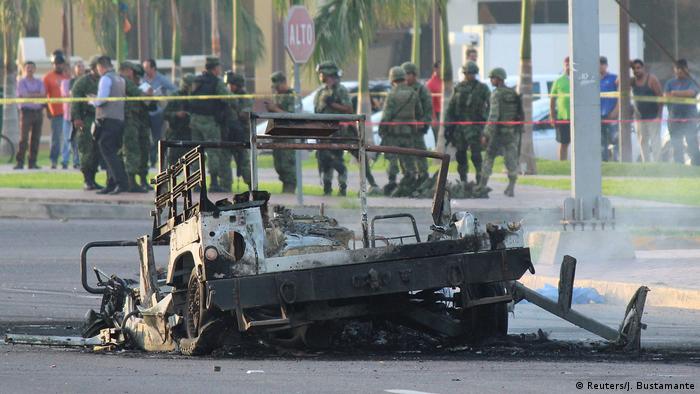 The military convoy was escorting a wounded suspect in an ambulance when it came under armed attack on the outskirts of Culiacan in the northern state of Sinaloa early Friday.

General Alfonso Duarte told reporters that Guzman's sons were "very probably" responsible for the pre-dawn ambush. The gunmen reportedly laid in wait for the ambulance before launching their attack with grenades and high-powered guns. They left two military vehicles completely burnt out on the highway and made off with the ambulance. They also freed the suspect, identified as Julio Oscar Ortiz Vega. Five soldiers were killed, while 10 others, including a Red Cross worker, were wounded.

The assault was the worst of its kind on the military since 2015, when drug cartel gunmen in the state of Jalisco shot down an army helicopter with a rocket launcher, killing 10 people. Officials said the brutality of Friday's attack indicates the ambulance may have been carrying a high-ranking gang member.

"These groups acted with cowardice, in a premeditated manner, and carried out the attack with weapons, with grenades," while the soldiers had only automatic weapons, Duarte said.

The soldiers had picked up the wounded suspect after a shootout between the army and cartel members in the mountain community of Bacacoragua, Guzman's hometown.

According to Duarte, Guzman's brother Aureliano Guzman Loera, alias "El Guano," is battling the Beltran Leyva cartel for control of drug production, including opium poppy fields, in the remote region.

Guzman led a local cartel in Sinaloa, one of Mexico's most violent states, up until his re-arrest in January. The drug kingpin was captured in the coastal city of Los Mochis six months after he escaped from a prison near Mexico City by sneaking through a tunnel in his cell's shower. He is currently in prison in Ciudad Juarez, awaiting extradition to the United States.

Some believe his sons are now running the gangand have changed the rules of engagement practiced by their father, who mostly kept a low profile. Others, however, say Guzman's longtime partner Ismael "El Mayo" Zambada is in control.

'El Chapo' could be returned to prison he escaped from

A lawyer for Joaquin "El Chapo" Guzman says the drug lord could be returned to a maximum-security prison from which he has already escaped once. Guzman's son was kidnapped earlier this week. (18.08.2016)