Son of anti-vaxxer urges vaccination before US Congress

Teenager Ethan Lindenberger called for fighting disinformation on vaccines before the US Congress, where he testified about growing up with an anti-vaxx mother. He managed to get his shots after asking for help online. 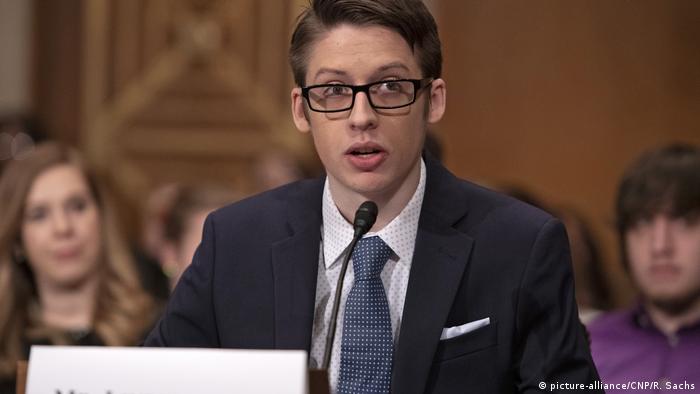 An 18-year-old from the US state of Ohio spoke before US lawmakers on Tuesday about getting vaccinated in spite of his mother's wishes.

"I grew up understanding my mother believed vaccines are dangerous, as she would speak openly about her views both online and in person," Ethan Lindenberger said in his testimony before Congress.

Lindenberger's mother, Jill Wheeler, is part of the global anti-vaxx movement, which believes that vaccines are dangerous and cause autism. While the claim has been repeatedly debunked, a large number of parents are still refusing to vaccinate their children, with a rise in infection rates reported by the Word Health Organization (WHO). Specifically, measles infections surged around 50 percent in 2018.

'That's what they want you to think'

On Tuesday, Lindenberger said his mother's "love, affection and care is apparent," but added she was immersed in the anti-vaxx online community and based her beliefs on anecdotal information.

He also described how he started researching his mother's claims by studying scientific journals and reports by the US Centers for Disease Control and Prevention, as well as public health organization websites. The teenager gradually became convinced that he needed to get his shots. When trying to raise the issue with his mother, in one instance stating that the measles, mumps and rubella (MMR) vaccine did not cause autism, she reportedly replied: "That's what they want you to think."

Eventually, in November 2018, he posted a question on the online discussion platform Reddit: "My parents are kind of stupid and don't believe in vaccines. Now that I'm 18, where do I go to get vaccinated?"

Following the instructions received in the comments, he visited the local Department of Health and received the MMR and polio shots, as well as immunizations against hepatitis A and B, influenza, tetanus and the papillomavirus.

Meanwhile, his Reddit post went viral and also garnered attention in conventional media, eventually leading to his testimony before the US Congress.

On Tuesday, Lindenberger called for countering the online anti-vaccination sites that share conspiracy theories and personal accounts. This information, according to Lindenberger, should be answered with equally personal stories about the deaths and illness resulting from a failure to vaccinate.

"When you convince parents that... their children are at risk, that's a much more substantial way to cause people to change their minds," he said.

Lindenberger's mother did not testify before the lawmakers. Speaking to the AP news agency, she said she was proud of the way her son carried himself but "didn't agree with anything he said."

"They've made him the poster child for the pharmaceutical industry," she said.

Also on Tuesday, Danish researchers led by epidemiologist Anders Hviid published results of a vaccines and autism study that tracked 650,000 children born between 1999 and 2010 in the Scandinavian country.

The researchers found that vaccinated children were actually less likely to have autism. Autism rates were 7 percent higher among children who never received the MMR vaccine, and children who received no vaccinations whatsoever were statistically 17 percent more likely to be diagnosed with autism. Previous studies have indicated a possible explanation for the discrepancy, as parents are more reluctant to fully vaccinate children who show symptoms of autism.