A car bomb in the Somali capital of Mogadishu has killed at least four people and injured several others, according to reports. The bomb detonated at a security checkpoint just 200 meters from the presidential palace. 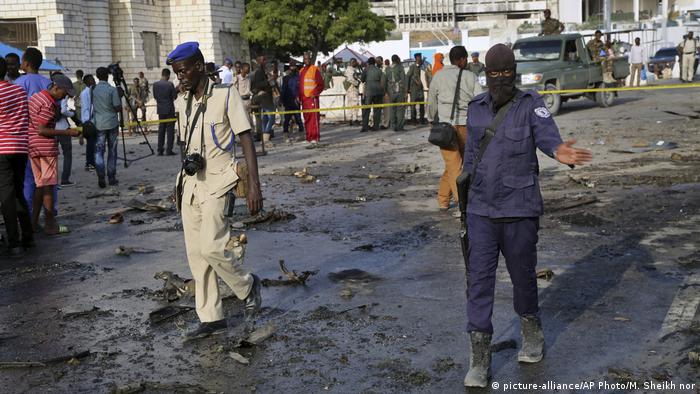 Plumes of smoke could be seen billowing over the Somali capital of Mogadishu on Sunday after a car bomb was detonated near the parliamentary headquarters and presidential palace.

Somali police said the blast had killed at least four people along with the driver of the car, and injured around 10 others. Among the dead were two soldiers, officials said.

The car bomb went off after security personnel stopped a suspicious vehicle at one of several checkpoints erected along a road leading to the parliament and presidential palace, senior police captain Mohamed Hussein told the AP news agency.

The blast site was located next to the Interior Ministry and just 200 meters (219 yards) from the presidential palace.

A few hours earlier, another car bomb attack killed one person and the driver in the Sinka Dheer area, just outside of Mogadishu. Officer Mohamed Abdi said the explosion occurred as soldiers arrived at the scene to inspect a suspicious car which had become stuck on a sandy road.

Sunday's blast comes just three days after at least 14 people were killed by a car bomb near the Weheliye hotel on the capital's busy Makka Almukarramah road.

Mogadishu has repeatedly been targeted by the Somalia-based jihadi group al-Shabab, the deadliest extremist group in Africa, which is seeking to topple the country's Western-backed government. A truck bomb attack on the capital in October killed more than 500 people, the deadliest single attack in Somalia's history. Only a few other attacks anywhere in the world have killed more people since the 9/11 terror attacks on New York City in 2001.

The threat posed by al-Shabab reflects the struggle Somalian forces face in maintaining security in the country.

The country's security is currently handled by a 21,000-strong African Union force, although those troops are expected to withdraw completely by 2020.

The United States has also stepped up efforts in the fight against al-Shabab, having carried out dozens of drone strikes on jihadi targets in the region over the past year. The effectiveness and accuracy of those drones has often been questioned, however.

Germany announced last month that it was ending its participation in an eight-year European Union training mission in Somalia, withdrawing the 5,000 Bundeswehr troops stationed in the country by the end of March.