Somalia is in such a dire mess that the newly elected government has no chance of stopping al-Shabab, thought to be behind Saturday's lethal truck bombing in Mogadishu. 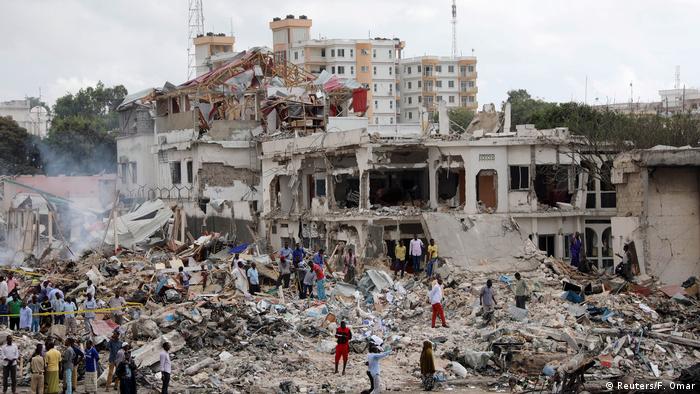 The timing of Saturday's attack was, once again, extremely strategic. The blast occurred just two days after the head of the United States Africa Command led a delegation to meet Somalia's president, Mohamed Abdullahi Mohamed. Afterwards, both Mohamed and the US commander reaffirmed the commitments of their countries to fighting the Islamist militant group, al-Shabab.

On the same day, Somalia's defense minister and army chief both resigned in an apparently coordinated action. Although no official reasons were given for the resignations, it seems they didn't think the government of Mohamed, who was elected in February, had consulted them enough on defense issues.

All in all, it was the perfect time to send a reminder of the powerlessness of the Somali government and its allies by detonating a truck packed with several hundred kilos of explosives in the center of the capital, Mogadishu.

Assumed to be al-Shabab 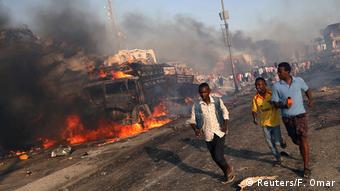 No one has yet claimed responsibility for the attack. However, many inside and outside of Somalia believe it's the work of the al-Shabab terrorist group.

The extremist group has a history of launching bomb attacks against civilian targets. And since the Trump administration announced plans to expand its counterterrorism drone strikes, al-Shabab has stepped up its violence, including in neighboring Kenya.

This latest bombing, at an intersection in Mogadishu's lively Hodan district, a commercial area filled with shops, hotels and businesses, guaranteed a large number of victims  – and thus maximum attention.

Somalis took to the streets of Mogadishu on Sunday, primarily to protest against al-Shabab and terrorism. But as soon as they have counted and buried their dead, people's attention is bound to turn to Mohamed Abdullahi Mohamed and his government. 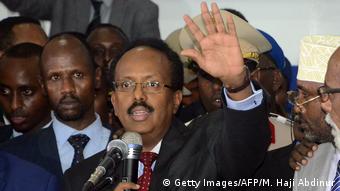 As is so often the case in Somalia, the government has managed to lose the confidence of the population within just a few months.

A former Somali prime minister, Mohamed was elected president in February 2017 in an indirect ballot by traditional elders. There was great hope for his presidency but as yet, Mohamed hasn't succeeded in denting Somalia's complex clan-based politics, let alone cracking down on the country's endemic corruption. And the so-called road map developed by Somalia's government, together with the United Nations and other partners, isn't going anywhere either.

Speaking after the blast, Mogadishu's mayor said Somalia need to "stand united" against al-Shabab. That is easier said than done in a country where alliances are to the clan, not to the state, and where politicians have passionately adopted the colonial model of "divide and conquer".

Somalia is traditionally home to a moderate form of Islam and attempts by Saudi Arabia to export a strict form of Wahhabism haven't shown much success.

As such, religious fundamentalism doesn't explain the rise of al-Shabab. Rather, the group developed in the power vacuum of a state that has been falling apart since the military regime of President Siad Barre was overthrown in 1991. Being essentially a failed state for more than two decades, Somali governments – even the new one – are helpless to stop it.

Despite its pledges to international terrorism networks, Al-Shabab is at its core a successful business model, earning its adherents millions in endeavors such as the illegal export of charcoal, and piracy.

Al-Shabab defectors reveal that the group isn't necessarily filled with religious fanatics. Rather, it's young men who simply can't imagine a dignified future in their own country. The incompetence of Somali politicians, coupled with endemic corruption on par with the most notorious countries on the continent, leaves more and more young people with only two choices: pack their suitcases and flee to Europe – or be enlisted by silver-tongued al-Shabab recruiters. 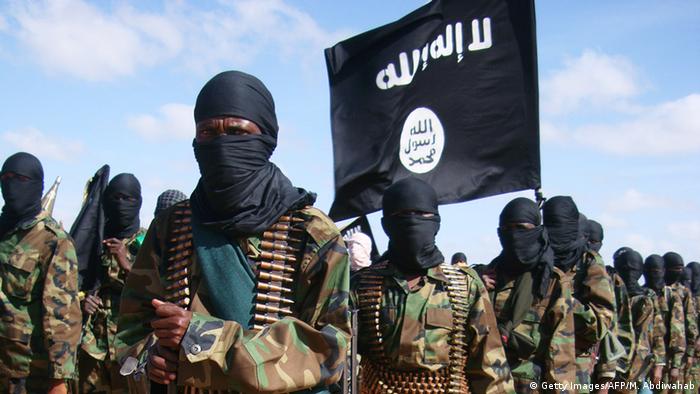 Al-Shabab fighters have launched several attacks in past weeks

Those youngsters have given up any hope of the international community showing a real interest in stabilizing this strategic country – apart, of course, from the monumentally unsuccessful war on terror. Rightly so – as the realpolitik of the British and Americans, and more recently Gulf sheikhs, shows.

Saturday's bombing hit Qatar's embassy, injuring a Qatari representative. This is as regrettable as it is ironic. The political crisis between Qatar and Saudi Arabia, which is making itself felt on the Horn of Africa, is yet another issue dividing a Somali government already irreparably split over so many other things. And it's yet another obstacle to Somalia politicians dedicating themselves to bringing peace to this devastated country and its citizens.