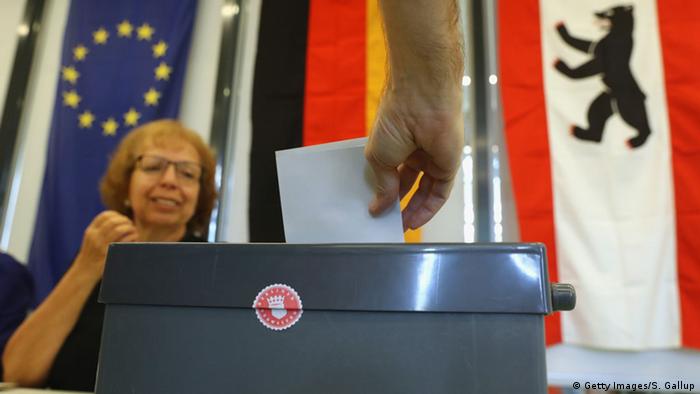 The Social Democratic Party (SPD) won the most seats in Berlin's regional elections on Sunday and remains the strongest party in the German capital's state assembly - though it will have to find a new coalition partner as the Christian Democratic Union (CDU) finished with 17.6 percent, exit polls showed.

The center-left SPD, led by Berlin Mayor Michael Müller, won 21.6 percent of the vote. "We have reached our goal. We have a mandate to form a government," said Müller.

Chancellor Angela Merkel's CDU finished second with 17.5 percent and the Left Party came in third with 15.7 percent of the vote, marking a 4 percent gain from the 2011. The CDU dropped 5.7 percent, marking its worst performance in the capital since German reunification, public broadcaster ARD reported.

As no party was able to win an outright majority, the SPD will now form a new regional coalition government. It is largely expected to form a three-party coalition along with the Left and the Greens, who witnessed a 2.5 percent drop from 2011 with 15.1 percent. Some 67 percent of Berlin's 2.5 million eligible voters turned out for Sunday's election.

"We have achieved a great result," said AfD deputy leader Beatrix von Storch. "The AfD has arrived in the German capital and is also on a direct path to the Bundestag."

Earlier Sunday, Germany's "Frankfurter Allgemeine Sonntagszeitung" said that gains for the AfD in a city as multicultural as Berlin would show that the party "doesn't just benefit from discontent in rural areas but can establish itself ... in a city of millions that is known for its open lifestyle."

The anti-migration party has capitalized on the popular backlash against Merkel's open-door refugee policy, which has seen more than 1 million asylum seekers arrive in Germany in the past year.

On Saturday, Müller had issued a dramatic warning, saying that a strong AfD result would be "seen throughout the world as a sign of the resurgence of the right and of Nazis in Germany."

Meanwhile, the liberal FDP gained 6.7 percent of the vote, breaking the threshold of 5 percent to join the assembly. The Pirates witnessed a significant decline and finished with less than 2 percent of the vote, marking their exit from the legislature after failing to clear a 5-percent minimum.

Sunday's elections represent another significant blow to Merkel's party. The CDU's Michael Grosse-Brömer said the party "cannot be satisfied" with the devastating results.

The CDU suffered a sobering defeat to the AfD in the Mecklenburg-Western Pomerania regional elections at the beginning of September. The CDU finished third behind the SPD and AfD with 19 percent - its all-time lowest result in the northeastern state.

It's been a long time since there's been this much political uncertainty in Germany. The general election is still a year away, but the refugee crisis has had a major impact on politics. Here's where the parties stand.

Opinion: No end to the Merkel era