The death of 71 migrants in the back of an abandoned truck in Austria highlights Europe's failure to deal with the expanding refugee crisis. That these people died while traveling inside the EU is extra troubling. 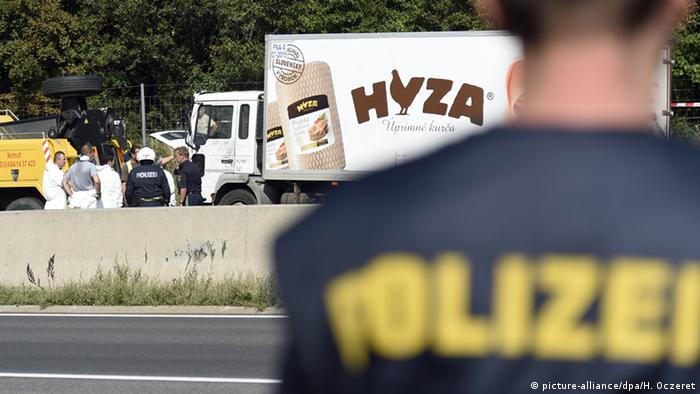 It's being called the largest global movement of population since World War II. Millions of people have left war-torn, impoverished failed states to board rafts to cross the Mediterranean or make illicit land crossings through the Balkans in search of a rational, stable life in western and northern Europe.

But the risks involved are made apparent by daily reports of often deadly sea crossings or border misery in Balkan states as the European Union offers at best a patchwork response to the humanitarian crisis.

European leaders preach compassion and empathy to these refugees, but have so far failed to agree on a common strategy that would allow safe passage into the EU.

That was brought into focus this week with the horrific discovery of an abandoned poultry truck, laden with the corpses of 71 refugees, who had apparently suffocated to death and been left on the side of an Austrian highway.

The news broke as European leaders were meeting in Hungary to discuss the crisis.

"One is basically at a loss for words in view of the extent of suffering there," German Chancellor Angela Merkel's spokesman Steffen Seibert said of the Austrian deaths.

And condemnation was universal.

"We believe this underscores the ruthlessness of people smugglers who have expanded their business from the Mediterranean Sea to the highways of Europe. It shows they have absolutely no regard for human life," Melissa Fleming, the spokeswoman for the UN refugee agency in Geneva, told reporters Friday.

Experts who study migration and refugees say Europe needs to move away from the usual reflexive get-tough approach to tightening its borders or cracking down on organized crime.

"Yes, the people who died in Austria this week might have fallen victim to organized crime," said Martijn Pluim, a director at the International Centre for Migration Policy Development in Vienna. "But you should not claim that you are going to save lives by only taking a law enforcement approach," Pluim told DW. 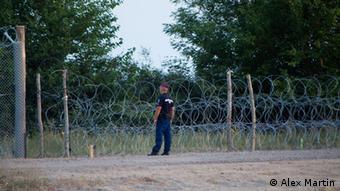 A Hungarian police officer oversees a section of the fence currently under construction along the border with Serbia.

Most migrants and refugees are showing up on the EU's external borders via Italy, Greece and Hungary. Budapest has begun erecting barriers on its border with Serbia and deploying extra police. And anti-immigrant sentiment has led some calls to suspend the Schengen agreement and reinstate border controls between European member states that would end passport-free travel within much of the 28-nation bloc.

But Austrian Interior Minister Johanna Mikl-Leiter said the incident would not lead authorities to take such a drastic step. "We don't need border controls," she told reporters. "What we need is to set up safe points of entry at the EU's outer borders, where we can immediately differentiate between refugees fleeing war and those fleeing for other reasons."

That line of thinking from a center-right European politician is in line with what migrant experts and human rights groups advocate and may signal a shift in policy, albeit one that advocates say is long overdue.

“What's urgently needed is what Amnesty International has been saying for years: Europe has to step up and provide protection to more, share responsibility better and show solidarity to other countries and to those most in need," Gauri van Gulik, Amnesty's deputy director for Europe said Wednesday.

The Austria incident is causing some serious soul searching in Europe because unlike the thousands of people who have drowned in the Mediterranean trying to reach European shores, these ill-fated people had already reached European soil and had to resort to dangerous, illicit means to continue their journey.

That's a point highlighted by Olaf Kleist, a fellow with the Refugee Studies Centre at the University of Oxford.

"These people most likely arrived in the EU already in Greece before they had to take this journey through the Balkans to western Europe," Kleist said."So this is really a sign of failed internal EU policies of how to deal with asylum seekers who have already arrived in the EU."

Past strategies of trying to crackdown on asylum seekers by national governments have been a failure and have eroded the political will from reaching a comprehensive EU-wide policy on migrants.

This is especially true when making the distinction between war refugees whose homes have been destroyed and economic migrants who are seeking job opportunities in wealthier nations.

"Refugees are not going to stop coming because of migrant laws or threats of incarceration," Kleist said. "They are coming because they have no other opportunities, they come to survive."

Meanwhile, police in Hungary say they have arrested four men - three Bulgarians and an Afghan citizen - and had questioned at least 20 people and searched houses to find the ringleaders suspected of organizing the deadly truck transport.

"We expect that that this is the trace that will lead us to the perpetrators," Hans Peter Doskozil, police chief of the Austrian province of Burgenland where the truck was found, told reporters Friday. The Austrian police officer made it clear that the people taken into police custody were not suspected to be the ring leaders of the smuggling operation.

But whether prosecutions are against petty operatives or mafia chieftains, it won't make much difference on a large scale as long as the influx continues and European leaders fail to reach consensus on how to fairly distribute incoming migrants and refugees between member states, Kleist said.

"Smugglers are the result of closed borders," Kleist said. "The only way we can actually guarantee or help to create safety and safe passage for refugees is if we have legal pathways into Europe and within Europe as well, so smugglers can't offer something to asylum seekers and refugees that the EU basically withholds."

Hungary is mulling sending over 2,100 police officers to its southern border to stop the flow of migrants into the country. Meanwhile, the police fired tear gas on people trying to leave a refugee center. (26.08.2015)