Smarter Soccer Through Chips | Germany| News and in-depth reporting from Berlin and beyond | DW | 06.01.2005

Controversial calls in soccer about whether a player was offsides or a ball really made it behind the goal line could be a thing of the past thanks to a new technology developed in Germany. 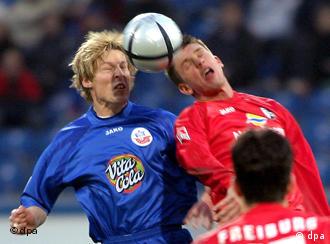 Soon the ball will be smarter than the players

The scientists at the Fraunhofer Institute for Integrated Circuits looked somewhat out of place on the practice field next to their Erlangen facility kicking a soccer ball around. But although they might be stiff-legged and pale from all that time sitting in front of computer screens, the decidedly unsporty researchers could be changing the way world soccer is refereed.

They have developed a new, wireless ball and player location system that can immediately tell referees and game analysts where the soccer ball or striker is at any point in time -- to the centimeter.

The Fraunhofer scientists got the initial assist from Cairos Technologies in Karlsbad. The company's director, Hartmut Braun, got the idea with a friend after watching a game. He knew that after a soccer game, fans around the world gather at their local bars or in homes debating whether the ball was actually in the goal or some player was really offsides when he made that winning kick.

There has been talk about installing photoelectric sensors around the field or even radar. But Cairos decided to ask the Fraunhofer Institute to plant electronic bugs of a sort in the balls and the players' shinpads which enable sensors to pinpoint their exact position on the field at any time. 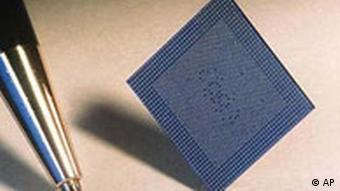 For five years, the chip-wearing scientists in Erlangen kicked a chip-ball around, measuring, programming and playing test matches on the roof of their building and on the small field next door.

The chips read the current position of the ball and the 22 players on the field up to 2000 times a second, according to the institute's René Dunkler. The data is then pick up by antennas that are placed around the field and sent on to a central computer, which processes the statistical information. 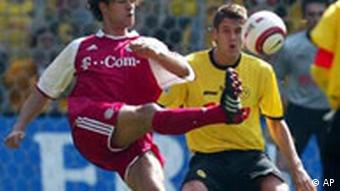 The new technology could, for example, tell spectators in a fraction of a second that the ball accelerated from 21 to 137 kph after the most recent kick or that it missed the right goalpost by 3.9 centimeters. Coaches could also tell which players were hustling around the pitch, and which were holding back, either out of fatigue or laziness.

Put to the test

Joseph Blatter, head of the soccer governing body FIFA, has given signs that he is receptive to the new technology. German ball manufacturer Adidas is to make a presentation to FIFA on Feb. 26, when a chip-laden ball will be used at a test match. If the trial is successful, the ball will be used in the Carling Cup final in Cardiff on Feb. 27.

Referees have also shown interest in the new technology. It could potentially help them in the many high-stress situations they find themselves in, when the calls they must make in mere moments seal the fates of careers, titles and millions of euros.

"We're seeing speed and accuracy in soccer developing at a rapid rate, and the job becoming more demanding," FIFA referee Urs Meier told the news magazine Der Spiegel. "If the technology is there, it should be used."

Other sports, other uses

Although the technology was initially developed for soccer, other sports could just as well benefit from the new chips, such as ski jumping, football, basketball or baseball. 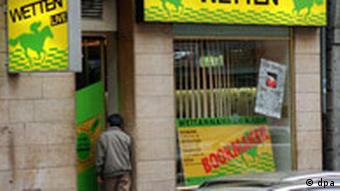 Bookies could hit it big with new betting options the technology creates.

Bookies could find use for the development, as the statistics generated could open up new vistas for gamblers.

Besides sports, tests using the chips in airports are underway and were featured at a recent trade fair on security. Developers say the system could also be used in searching for missing persons, guarding prisoners or maintaining security around buildings.

A revolution that is beginning with a little black-and-white ball looks like it could spread much further.

Fashion As Smart As You Are?

It’s not enough for your clothes to just look good anymore. The coming trend in German and other European markets is intelligent clothing – active, functional garments that promise a brave, new world of fashion. (Nov. 12, 2003)

More than Just the Shirt on your Back

If stars like Franz Beckenbauer had looked into the future during the 1970's and seen the soccer shirts of today, they would have thought they were looking at space age technology -- and they wouldn't have been wrong! (June 20, 2004)

The Ugly Side of the Beautiful Game

An explosion of racial abuse in European soccer over the past few weeks has seen the return of a problem once thought of as a relic of the game. But has it really ever been away? (Nov. 28, 2004)

In-depth reports and news from the German Soccer League. All the action plus weekly live ticker for selected matches, Tip for the Top betting game and league tables.