Many textile workers who survived the Rana Plaza disaster in April 2013 are still waiting to see compensation and better workplace safety standards. Some significant steps have been taken, but progress has been slow. 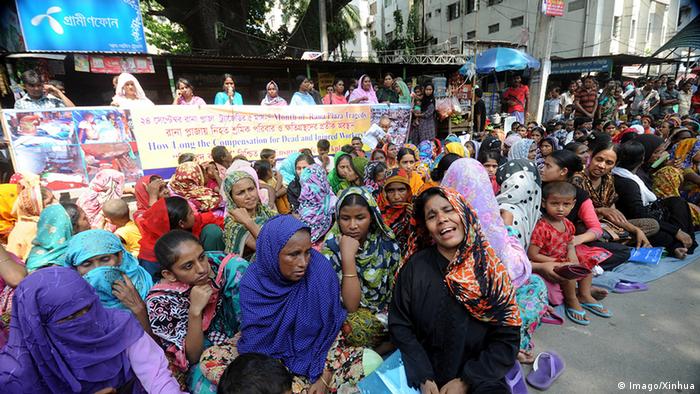 With the anniversary of Bangladesh's worst textile factory accident coming up next month, the ILO is calling on Western companies to donate to the compensation fund for the victims and their families.

The collapse of the Rana Plaza factory complex in Dhaka on April 24, 2013, killed over 1,100 textile workers and left hundreds more injured. It was the worst in a long series of factory accidents in Bangladesh, shifting the international focus on the abysmal working conditions and safety standards in garment factories. It also kick-started a debate about the responsibility of the many Western fashion labels that source their clothing from these plants.

With more than 5,000 garment factories, Bangladesh is the world's second biggest clothing manufacturer behind China. The bulk of that apparel, about 60 percent, gets sent to Europe.

Brands must pay up

The International Labor Organization (ILO) launched a trust fund to compensate Rana Plaza victims and has been calling on the 28 brands linked to Rana Plaza to pitch in a total of $40 million (29 million euros) before next month's anniversary. So far 10 brands have made donations: Primark, C&A, Mango, Bonmarche, El Corte Ingles, Loblaw, Mascot, Camaieu, Premier Clothing and Inditex. 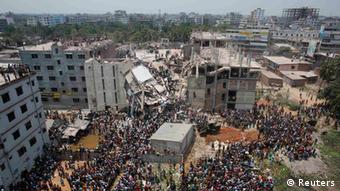 "The fund needs $40 million, so we need the brands to pay a significant sum, meaning several million each," said Frauke Banse, urgent appeals coordinator for the Clean Clothes Campaign in Germany. "It's not a matter of good will, it's not a charity donation. Even though it's a voluntary trust fund, in our view they have an obligation to pay."

The fund plans to start processing victims' claims for medical costs and loss of income from March 24. But so far less than $6 million has been raised.

Five German labels sourced their clothing from Rana Plaza - KiK Textiles, Adler Modemärkte, NKD, Kids for Fashion and G. Gueldenpfennig. Only KiK says it has contributed a sum to the ILO fund, but it has chosen not to be displayed publicly as a donor.

Boosting safety in the workplace

Talk of compensation so long after the tragedy hasn't been the only sluggish attempt to make amends. In the aftermath of the collapse, 150 mainly European companies signed an accord last year to improve fire, electrical and building safety standards in Bangladesh's garment factories. 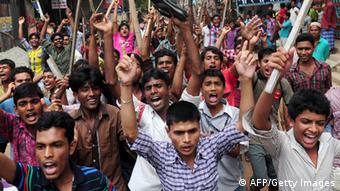 The group is oaying for teams of engineers and technicians to inspect the health and safety conditions at around 1,500 factory sites by September. An alliance of North American companies has also pledged to support inspections and safety upgrades at several hundred factories.

"We are constantly working to strengthen the measures in place in the markets we operate," said Biagio Chiarolanza, CEO of Benetton Group, which signed the accord. "This agreement foresees […] a joint systems of inspections, training and financial commitments specific to Bangladesh and necessary to build a sustainable garment industry."

But progress has been slow. Inspections only got underway in November, and the findings from the first 10 factories were released in early March.

Many problems, no easy fix

The reports said most sites didn't have adequate fire exits or sprinkler systems. They described exposed electrical cables and major structural problems, such as cracked support beams, overloaded ceilings and extra stories. One 10-story factory had multiple hairline cracks in its floor slabs.

"These 10 factories will implement the recommended corrective measures without hampering their production," Shahidullah Azim, vice president of industry group Bangladesh Garment Manufacturers and Exporters Association told AP. "We have no problems with this." 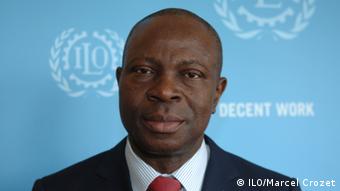 Gilbert Houngbo says progress is being made

Factory owners are required to address most safety problems within six months. Roy Ramesh, the head of the Bangladesh chapter of labor group IndustriALL said it's a mammoth task that will take time.

"Things are moving in the right direction. To inspect thousands of factories and to upgrade those factories within a few months or even a year isn't possible," he said. "The main aim of the accord is to make it a safe sustainable garment industry in Bangladesh. We are moving towards that."

While basic reparations are already underway at some sites, ILO Deputy Director General Gilbert Houngbo says there are discussions around how the more costly reparations will be funded. He said things need to be taken one step at a time.

"A lot of groundwork had to be done" he said. "There will be some expensive costs, and we need to put in place some kind of financing mechanism."

More power to the workers

Bangladesh is a major supplier to Western companies thanks to the low wages and cheap production costs. The textile sector provides jobs to around 4 million locals, most of them women.

Ramesh argues the best way to ensure fire and building safety standards are upheld in the long term is to give workers more rights to bargain collectively and take part in occupational health and safety discussions. "The structural integrity, the fire safety, the electrical safety are all issues on the ground, but these problems can't be addressed properly without negotiation between the employers and employees," he said.

A new labor law adopted in mid-2013 was a big step forward for workers' rights, says Houngbo. It meant workers no longer needed approval from factory owners to form a trade union and saw the number of registered unions grow from just three in 2012-13 to more than 120. Later in the year hundreds of textile workers took part in demonstrations and succeeded in securing an increase in the minimum wage from $38 per month to $73. However, that's still less than textile workers make in other Asian countries - and many say it's not enough to ensure people's livelihoods.

"Things are certainly on the move," said Gilbert Houngbo. But he warns the trick will be striking the right balance between lifting workplace safety and wages without jeopardizing the competitiveness of Bangladesh's textile sector.

"The first important challenge is to maintain the momentum. We have to avoid a situation where it goes back to business as usual."