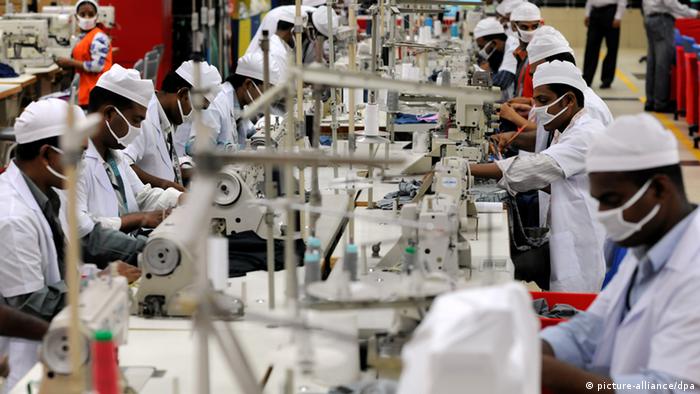 Two Swiss-based federations, UNI and IndustriALL Global Union, which for years have campaigned for drastic factory improvements in cheap-labor countries such as Bangladesh and Cambodia, said a safety deal signed by Western retailers marked a step forward.

"This accord is a turning point," said Philip Jennings, head of UNI Global Union. "We've smashed the window of self-regulation."

"We are putting in place rules that mark the end of the race to the bottom in the global supply chain. This agreement is about life and death," Jennings told the news agency AFP.

The unions' remarks preceded Friday's reopening by owners of some 300 garment factories in the Ashulia industrial hub on the outskirts of the Bangladeshi capital, Dhaka, after government promises that police would deter possible violence.

Owners had shut down the hub earlier this week after tens of thousands of workers staged protests - coupled with vandalization of factories - to back demands for improved workplace safety and pay rises.

The safety accord binds retail chains to conduct independent building and fire safety inspections and to contibute to payment of repairs in Bangladesh, the world's second-largest apparel maker which relies largely on women textile workers. Signatory firms must fund activities of a steering committee, safety inspector and training coordinator.

It also calls for binding arbitration enforceable in the courts of the country where a retailer is domiciled.

The ceiling of a garment factory workshop in Cambodia collapsed killing two and injuring 10. The accident highlights the ongoing dangers for workers in the global garment industry. (16.05.2013)

"The companies who signed up are to be applauded," said Jyrki Raina, head of the Geneva-based IndustriALL labor group, which had a leading role in hammering out the accord in recent weeks.

"We are talking improving the working conditions and lives of some of the most exploited workers in the world, earning $38 (29 euros) a month in dangerous conditions," Raina added.

By Thursday it had drawn 31 signatories, including the world's biggest fashion retailers, Inditex, owner of the Zara chain, Marks&Spencer, Carrefour, H&M and German-based retail chains such as Tschibo, Aldi, Lidl and Rewe.

Several large US-based retailers, noteably Gap Inc. and Wal-Mart Stores Inc., abstained from signing by a union-set Wednesday deadline, saying they would not join the European-led pact without changes to arbitration procedures.

Walmart, however, pledged on Wednesday to inspect its 279 Bangladeshi suppliers, while Gap said it launched it own drive last October. The Washington DC-based National Retail Federation criticized the deal, saying accountability was lacking on how funds for safety measures were to be spent.

The April 24 collapse of the nine-storey Rana Plaza building, which housed five textile factories, at Savar, near Dhaka, ranks as one the world's worst industrial disasters.

The Savar collapse capped a string of factory blazes in Bangladesh that claimed the lives of several hundred workers. A shoe factory collapse in Cambodia killed two people on Thursday.

The deputy director general of the International Labour Organization (ILO), Gilbert Houngbo, who led an emergency mission to Bangladesh this month, said around 1,000 producers supply the 31 signatories of the deal. Bangladesh has some 3,500 export-focused garment factories.

"Even if one-third of factories are inspected, that's still a huge improvement ... But inspection is one key issue. Remedial action is another," he said.

Globalization meant that firms needed to check every link in their worldwide supply chains, Houngbo added.