Tens of thousands of Slovaks have rallied to demand the country's police chief be fired following the murder of Jan Kuciak. Thursday's march was the largest since protests forced prime minister to resign last month. 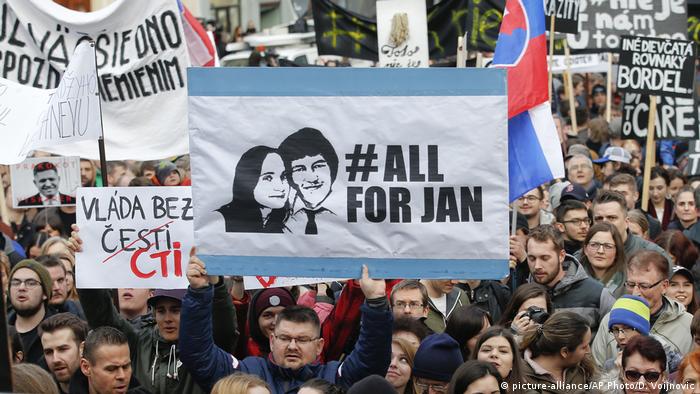 Tens of thousands of Slovaks took to the streets on Thursday to demand the ousting of police chief Tibor Gaspar over his handling of reporter Jan Kuciak's murder and failure to curb the country's rampant corruption problems.

An estimated 45,000 people are estimated to have taken part in the mass rallies, 30,000 in the capital of Bratislava alone. The latest demonstrations are the largest since protesters forced Prime Minister Robert Fico to step down in March.

The murder of 27-year-old investigative journalist Kuciak and his girlfriend in February cast a spotlight on the high levels of alleged corruption among politically connected businesspeople inside the European Union member state. Police said they believe that the reporter's murder was "most likely" related to his investigation into alleged ties between top politicians and the Italian mafia.

Protesters denounced Gaspar for failing to crack down on corruption during his time as police chief, and called for a new law that would prevent the interior minister from naming a successor.

"The new government hasn't done anything to convince me it will be different than the old government," 38-year-old protester Jan Filip told the Reuters news agency. "Almost all of the cases Kuciak covered could already have been investigated, yet none of them made it to court."

Slovakia's left-leaning President Andrej Kiska, a liberal lawmaker at odds with the country's broad coalition led by left-wing nationalists, echoed calls from the street for Gaspar to step aside.

Kuciak's investigations, which were later published posthumously, reported on a deal between the Slovak government and the country's biggest privately owned security firm, whose owner is a relative of Gaspar.

Kuciak had also published a series of stories implicating former Interior Minister Robert Kalinak, who appointed Gaspar back in 2012. Kalinak resigned shortly after protesters had begun taking to the streets.

The police chief has denied any wrongdoing.

Slovakia's former Prime Minister Robert Fico was detained before a protest defying coronavirus restrictions. Fico is a vocal critic of anti-COVID measures in the pandemic-hit country.

Special units of Slovakia's police have detained several high-profile law enforcement veterans, including a former chief of police. The EU country is still reeling from the murder of investigative reporter Jan Kuciak.

Slovak businessman Marian Kocner has been found innocent of charges that he ordered the murder of journalist Jan Kuciak. The 2018 killing shocked the country and toppled the government.