The article journalist Jan Kuciak was investigating before his murder has been published by his news outlet. It alleges that men wanted on Mafia-related charges in Italy were making deals with some of Slovakia's elite. 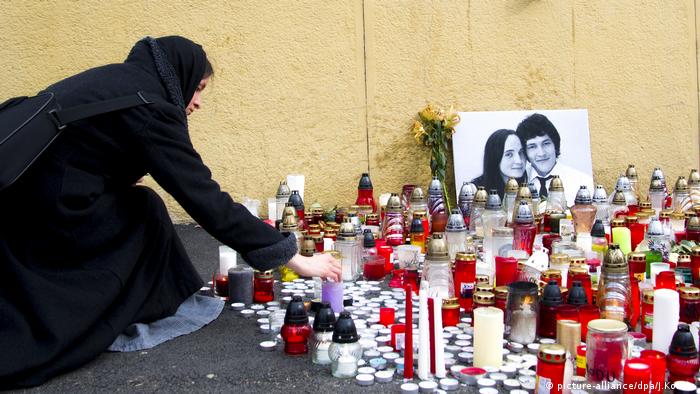 The employer of murdered Slovak investigative journalist Jan Kuciak published his explosive last report at midnight on Wednesday. The story probed links between the Italian mafia and the inner circle of Prime Minister Robert Fico.

The unfinished article released by Aktuality.sk described alleged members of the Italian 'Ndrangheta crime syndicate living in Slovakia and their dealings in the agriculture and real estate sectors. It also detailed one mafioso's business ties to Viliam Jasan, the secretary of Slovakia's security council, and Maria Troskova, a chief state advisor.

"Two people from the circles of a man — who came to Slovakia as someone accused in a Mafia case in Italy — have daily access to the country's prime minister," Kuciak wrote.

"Italians with ties to the Mafia have found a second home in Slovakia. They started doing business, receiving subsidies, drawing EU funds, but especially building relationships with influential people in politics — even in the government office of the Slovak Republic. They owned or still own dozens of companies. Their property is worth tens of millions of euros."

In the wake of the report, Jasan and Troskova announced in a joint statement that they were resigning. They expressed their condolences to the victims' families and "categorically" denied having anything to do with the murders of Kuciak and his partner.

Fico, who has offered a €1 million ($1.2 million) reward for information on Kuciak's slaying, condemned the report, and the insinuation that someone in the political sphere was involved in the crime.

"Do not link innocent people without any evidence to a double homicide. It's crossing the line. It's no longer funny," Fico said.

Fico has long had an antagonistic relationship with the press, in the past calling journalists "hyenas" and "prostitutes."

Kuciak, 27, was found dead in his apartment on Sunday, as was his girlfriend Martina Kusnirova. They had both been shot.

The reporter's colleagues and his employer have both expressed this suspicion that organized crime had something to do with his murder.

Slovak Culture Minister Marek Madaric announced on Wednesday that he was stepping down over the incident, saying "I am not able to cope with the fact that a journalist was killed during my time in office."

Kuciak is the first journalist ever killed in Slovakia, but the second anti-corruption reporter murdered in the EU in less than six months. Last October, Maltese journalist Daphne Caruana Galizia died in a car bomb attack.

Police said two of the accused watched from nearby as Caruana Galizia set out in her car before telling George Degiorgio to detonate the device via SMS. Degiorgio sent the text from a boat outside Valletta harbour. (21.12.2017)