SIPRI: Weapons sales up again worldwide | World | Breaking news and perspectives from around the globe | DW | 11.12.2017

Arms sales are increasing around the world. The current report from the Stockholm International Peace Research Institute (SIPRI) shows that the main beneficiaries are armaments groups in the US and Western Europe. 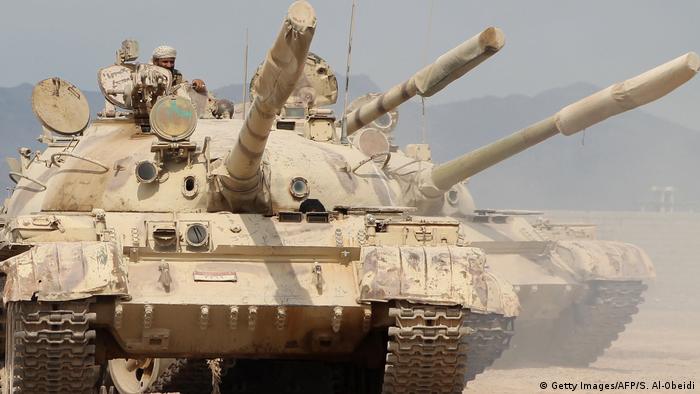 Munitions, tanks, drones: The global trade in arms and military services increased again in 2016, for the first time in five years. It was up 1.9 percent on the previous year — and 38 percent compared to 2002. These new figures are from the latest report on the international arms industry by the Stockholm International Peace Research Institute (SIPRI). It says that in 2016 the world's 100 biggest armaments groups sold $374.8 billion (€317.7 billion) of weapons and weapons systems.

Particularly in the United States, armaments groups are producing and selling more weapons. According to the report, sales from US firms rose 4 percent in 2016, totaling $217.2 billion. This was not only because of the US' own military deployments abroad: The figure was also boosted by the purchase of large weapons systems by other countries. The US group Lockheed Martin — the biggest weapons producer worldwide — did lucrative business selling its new F-35 to countries like Britain, Italy and Norway. Its biggest customer, though, is the United States Air Force. 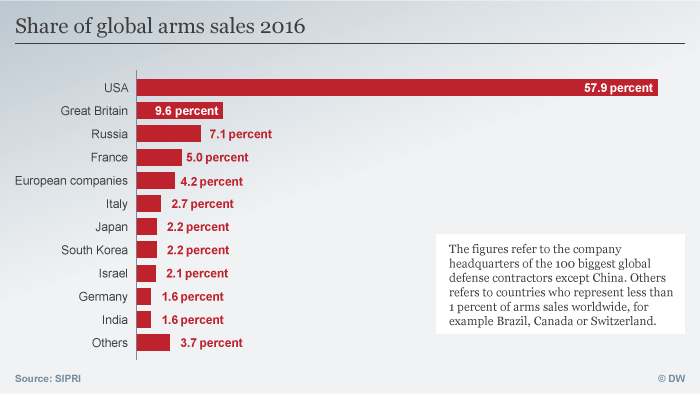 Big American players like Lockheed Martin make up the majority of the top 100 armaments groups researched by SIPRI's experts. Once again, the report clearly shows that the majority of arms come from American companies — a total of 57.9 percent of all global arms sales. Western Europe takes second place in the list of the most important suppliers of arms, followed by Russia with 7.1 percent of arms sales around the world.

The picture is more mixed in the Western European countries. While French and Italian firms are selling fewer arms, German and British groups — despite Brexit — increased their turnover. The German tank manufacturer Krauss-Maffei, for example, and Rheinmetall, which makes military vehicles, profited from the demand for their products in Europe, the Middle East and South-East Asia.

"Nonetheless, it's very difficult to make a direct connection between large arms purchases and ongoing wars. But of course, there are links: There's a greater demand for certain types of weapon — munitions, missiles or ground vehicles, for example," says Aude Fleurant, Director of the Arms and Military Expenditure Program at SIPRI. The rise in arms sales around the world is also a response to smoldering conflicts, she adds. "We observe that in some regions the perceived threat is increasing."

South Korea is arming itself

South Korea is one example of this. In 2016 South Korean firms reported a huge 20.6 percent increase in arms sales. "That quite clearly has to do with the security situation in the region," Fleurant says. South Korea feels seriously threatened by the nuclear provocations of its neighbor North Korea — and is increasing its military expenditure in response. South Korean arms manufacturers, who mainly sell to their country's defense ministry, are profiting from this.

The SIPRI researchers believe China may also be a top weapons manufacturer. The country does not, however, appear in their statistics, because the experts have no reliable data on the Chinese arms trade. "But we assume that Chinese armaments groups are among the top 20 biggest companies in the world," says Aude Fleurant. 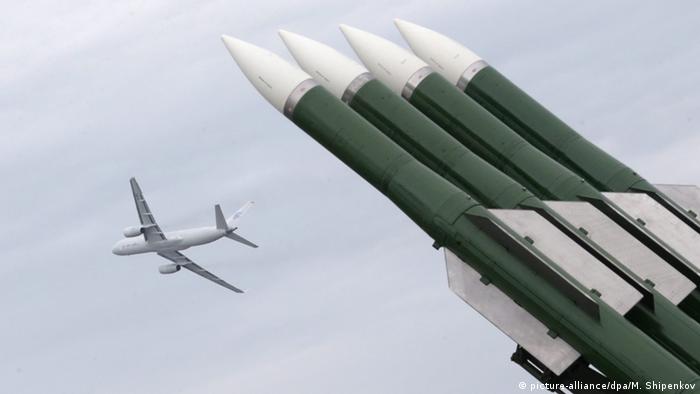 Anti-aircraft missiles can bring down passenger jets, as happened in 2014 with Malaysian Airlines flight 17

The experts did, however, observe that some of the traditional weapons importers apparently ran out of money in 2016. "The falling commodity prices for oil and gas have put such a strain on the public finances of many African and South American countries that they bought fewer weapons than planned," says SIPRI researcher Fleurant. Russia's armaments groups were also affected by the crisis.  Russian arms sales continued to rise, but at a slower rate than in the past. The reasons for this were falling oil and gas prices on the one hand, but also European Union (EU) and US sanctions.

There is no question that wars prompt individual states to procure weapons. When crises threaten, countries spend more money on more modern arms: They buy new warships, fighter jets and tanks, and armaments groups sell more as a result.

But according to SIPRI expert Fleurant, the majority of weapons are sold by arms manufacturers to the defense ministries of their own countries, not abroad. Thus, the new SIPRI report not only provides information about who is selling and buying how many weapons: It also says something about how safe the world as a whole currently feels.

Cities in Asia and Africa are growing at a very fast pace, and societies change. That brings many opportunities to those moving to the cities, but it also exposes them to insecurities and different forms of violence. (13.09.2017)

A new report by SIPRI says the pace of nuclear arms reduction has slowed, in part due to efforts to modernize delivery systems, such as missiles. The data shows states aren't prepared to "give up their nuclear arsenals." (03.07.2017)

Demand from the Middle East and Asia has driven the transfer of arms to its highest level in decades, a study shows. The US and Russia produced more than half of the world's arms in the past five years, it says. (20.02.2017)