Singapore domestic workers ′suffer exploitation and abuse′ | Asia | An in-depth look at news from across the continent | DW | 28.03.2019

The recent case of a terribly abused maid in Singapore has drawn attention to a "form of modern slavery" experienced by foreign domestic workers. But Singapore authorities say "the situation is definitely not so grim." 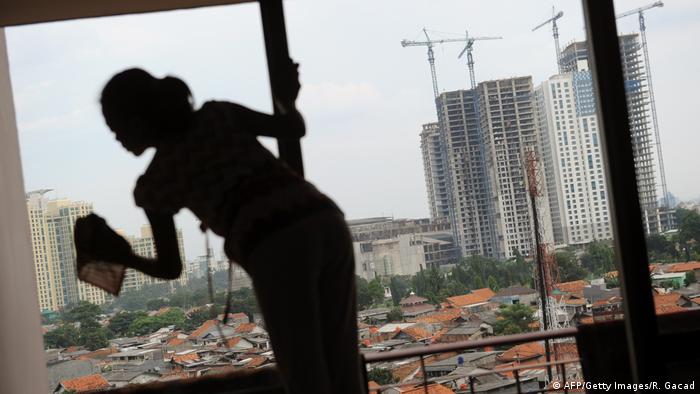 Rice with brown sugar was all that 31-year-old Moe Moe Than was allowed to eat. According to reports in local media, after the maid from Myanmar complained about not being fed properly, her employers force fed the mixture to her through a funnel. And after she needed to throw up, her employers then made her eat the vomit. Additionally, she had been caned and forced to perform chores in her underwear.

This case is just one example of what some foreign domestic workers (FDW) experience while being employed as maids in Singaporean households.

After Than's case was made public, her employers were each sentenced to almost three years in jail and they had to pay $10,000 (€9,000) in compensation to their victim.

At the time they hired Than, the two were reportedly out on bail after having been convicted for abusing their previous maid. And although these abusers were caught twice, most cases never make it to court and victims stay invisible.

According to a 2017 study conducted by the independent institute "Research Across Borders," six out of 10 FDW in Singapore have experienced abuse. The study said the abuse comes in various forms ranging from verbal threats and being overworked to being beaten or deprived of food. Some are even told when they can use the toilet.

The study draws a shocking picture of systematic abuse and "grossly unequal power relations" between FDW and their employers. Despite these conditions, men and women from neighboring countries keep coming to Singapore to look for jobs.

"We are talking about migrant workers from Myanmar, the Philippines or Indonesia, where the employment situation isn't great," said Sheena Kanwar, executive director of the HOME, an organization for FDW who have experienced abuse.

"Like most migrants they want to earn money to be able to support their families back home. They often risk their safety for the promise of a better life," she told DW.

Most FDW enter Singapore through recruitment agencies in exchange for a fee. During the first six or seven months, the money is then deducted from the worker's salary as compensation.

"This creates a very unhealthy form of bondage from the start," Kanwar said.

Additionally, FDW contracts in Singapore only have a live-in option, meaning that the employees are always around their employers.

"Nobody really knows what happens behind closed doors, so the regulation isn't easy. The workers are practically invisible," Kanwar said.

According to the study, many FDW end up in harmful employment situations because they are the only group of migrant workers not protected under Singapore's Employment Act, but are covered under the Employment of Foreign Manpower Act.

This means that the estimated 250,000 FDW in Singapore lack formal legal protection. Terms like salary, working hours and rest days can be decided by the employers, and there is only a guideline within the Foreign Manpower Act, but no legally binding conditions.

Kanwar believes that this lack of legal protection increases a sense of "ownership" over FDW that many employers have.

"It is a form of modern slavery. We have had nasty conversations with employers when we came in to take their [maids] to one of our shelters because they think they own that person," she said.

Than's ordeal came to light after the maid travelled back to Myanmar and confided in her recruitment agent about having been abused.

Later, Singapore's Ministry of Manpower was alerted and Than was asked to come back to Singapore and testify against her former employers in court. The case serves as a grim example of the abuse faced by FDW in Singapore.

Many of the maids who decide to run away from their employer and seek help are severely traumatized to such an extent that they fear to testify or claim compensation. Additionally, bringing these cases to court can take up to four years and chances of winning are often small.

Even though organizations like HOME are doing their best, offering shelter, legal aid and schooling options for abused FDW, Kanwar knows that Singapore needs to change its employment laws.

"Foreign domestic workers need to be included in the Employment Act so they can get legally binding contracts and proper protection by the law," she said.

Additionally, the head of HOME calls for a stricter regulation of the recruitment process that doesn't leave the maids in debt for months or even years.

"Foreign domestic workers also need a live-out option, to create a safe space they can return to after they finish working for the day."

In a reponse to DW's article, Singapore's Ministry of Manpower (MOM) said that "the situation of for FDW in Singapore is definitely not grim."

Citing from its 2015 survey, the MOM says that "more than 97 percent of FDW in Singapore expressed high levels of satisfaction working in the country, and close to 80 percent wanted to continue working here."

"They cover employers' responsibility to ensure adequate food, accommodation, mandatory rest days, prompt salary payment and safe working conditions," the MOM said. It adds that all cases of "abuses and exploitation of FDW are thoroughly investigated," and that perpetrators "face 1.5 times the maximum punishment under the Penal Code and are debarred from hiring FDW in the future."

A Hong Kong court has sentenced a local woman to six years in jail for abusing her Indonesian maid. Publicity from the case has triggered outrage across Asia. (27.02.2015)