A Hong Kong court has sentenced a local woman to six years in jail for abusing her Indonesian maid. Publicity from the case has triggered outrage across Asia. 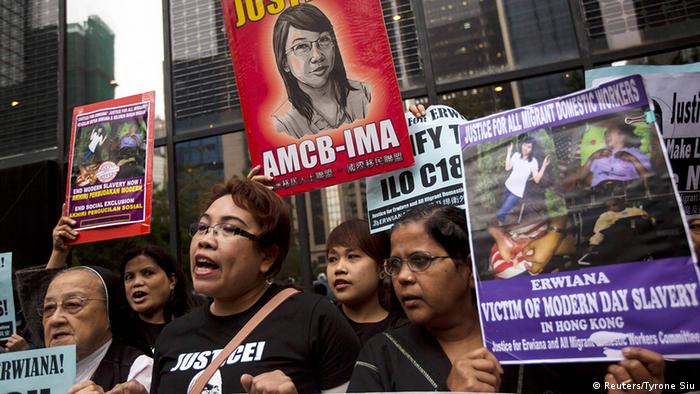 The sentence handed down by Judge Amanda Woodcock on Friday was one year short of the maximum sentence faced byLaw Wan-tung, 44, who had been convicted on 18 of the 20 abuse charges against her earlier this month. She was also handed a fine of HK$15,000 ($1,930, 1,725 euros).

In handing down the sentence, Woodcock said Law had "showed no compassion" to Erwiana Sulistyaningsih and that she regarded the maid and other members of her domestic staff as "people that are beneath her."

"She was given little rest, sleep and nutrition which left her a shadow of her former self," the judge said.

Among the charges that Law had been convicted on were causing grievous bodily harm and criminal intimidation against both Sulistyaningsih and another Indonesian maid. During the trial, prosecutors told the court that Law had used household items such as a mop, a ruler and a clothes hanger as weapons against her maids.

The judge also used the ruling to highlight the plight of many foreign domestic workers in the former British colony, saying among the contributing factors were "significant fees" charged by agencies in their home countries and a legal requirement for them to live at their employers homes.

"There must be an element of exploitation here... the domestic helper becomes trapped when they are unhappy, but cannot leave or change employers because the debt needs to be paid off," Woodcock said.

Sulistyaningsih returned to Indonesia in January of 2014 after having worked for Law for a period of eight months. Doctors who examined her said burns to her body were caused by boiling water, and pictures of her bruised body, which were posted on the Internet, sparked international outrage. Then-Indonesian President Susilo Bambang Yudhoyono described the treatment she had been subjected to as torture.