Thousands of domestic helpers and their supporters have rallied in Hong Kong to call for justice for a young Indonesian maid allegedly tortured by her employers. It was the second such protest in a week. 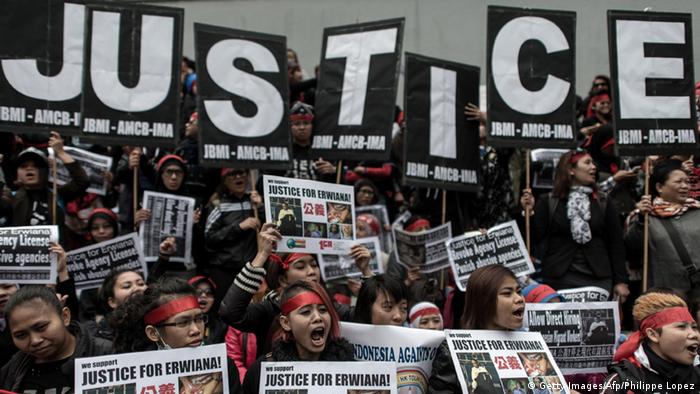 The crowd, mainly made up of domestic servants, rights activists and migrant group members, chanted "We are workers. We are not slaves" and "Justice for Erwiana." Some brandished Indonesian national flags or held up photographs showing the battered face and body of the 23-year-old maid.

Protesters handed a petition to Hong Kong Police Commissioner Tsang Wai-hun before going on to the government buildings.

"We want the investigation to speed up and we demand the Hong Kong government to stop abuses on domestic helpers in Hong Kong," said Eni Lestari, the rally spokeswoman, who also chairs the International Migrants Alliance.

Organizers claimed around 5,000 people took part in Sunday's rally, many more than the several dozen protesters who participated in a similar march on Thursday.

Erwiana Sulistyaningsih was reportedly left unable to walk after being badly beaten by her employer. She was admitted to an Indonesian hospital with critical injuries last week after returning home.

A second maid, identified only as Susi, has claimed to have been abused by the same employer.

No formal charges have yet been made against the employer, but police launched a criminal investigation last week after an outcry by domestic helpers and migrants support groups inthe city. Authorities are to travel to Indonesia on Friday to speak with Erwiana Sulistyaningsih in the hospital in the city of Sragen on the main Indonesian island of Java.

The case has re-awakened concern about the treatment of domestic helpers in the former British colony, which is home to nearly 300,000 maids from mainly Southeast Asian countries.

The International Migrants Alliance receives four to six complaints of physical assault each month from maids in Hong Kong, according to Lestari.