The unusually creative Denver Nuggets big man has scooped the NBA's award for the best player of the regular season amid stiff competition. Nikola Jokic is by no means the only Balkan basketball star to shine of late. 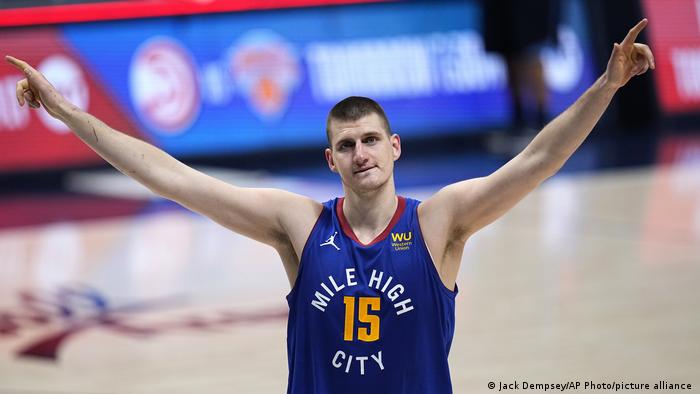 Nikola Jokic propelled the Denver Nuggets to third overall in the Western Conference, and is currently competing in the Playoffs

It was a night of firsts for Nikola Jokic as the Denver Nuggets center was named the Most Valuable Player (MVP) of the NBA regular season on Tuesday. Jokic became the first Serbian winner, the Nuggets' first MVP, and also the lowest draft pick ever to claim the accolade.

Back in 2014, the Nuggets drafted rookie Jokic as the 41st pick of all the young eligible talent that year.

By 2021, the vote for MVP wasn't even close: Jokic won 90 of the 101 first-place ballots cast. Soon after the news, the 26-year-old was asked how he had come so far since his late teens.

"A lot of luck, I can say, probably. A lot of people trusted me. A lot of people worked for me, so that I can get here. And I put [in] some work too. So it's a little bit of everything, you know," Jokic said on US broadcaster TNT after the announcement.

Asked by one of the last centers to win the MVP award, Shaquille O'Neal, whether he had ever dreamed of being named NBA MVP when he was growing up, Jokic said: "To be honest, I didn't even think about being in the NBA, you know. My goal, when I started playing basketball back home, it was playing in the Euroleague, because that was the closest big league to my country. ... But when the Denver Nuggets drafted me, it was an opportunity to become an NBA player, and I think I did a good job of using that opportunity." 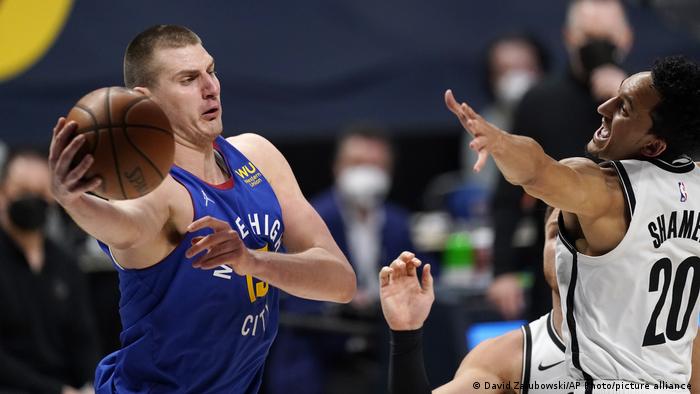 Jokic is an unselfish and highly intelligent passer, which is unusual for a larger player in his position

Creativity at center for Jokic

The unusual center has since matured into arguably the most creative player ever to play his position, revolutionizing the role in a manner rather reminiscent of the first European MVP winner, Germany's Dirk Nowitzki.

But whereas power forward Nowitzki was possibly the first big player standing at 2 meters with the shooting and ball-handling skills of a much smaller player, the 6-foot-11-inch (2.11 meter) Jokic has blossomed into the first center with the passing skills and court vision you would expect from a point guard.

His regular season points and rebounds averages are more than respectable for a center, at 26.4 points and 10.8 rebounds per game, but his average of 8.3 assists is virtually unheard of from the player typically expected to receive the ball close to the basket and finish.

Consistency also likely played some role in the voting; Jokic has had an injury-free season to date and was a constant presence for the Nuggets, unlike some of the league's other stars. 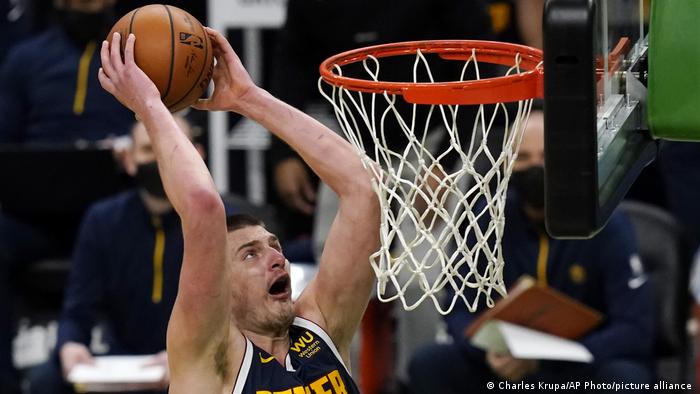 Although he does not boast the exceptional athleticism so common in the modern game, Jokic can rise up and finish at the basket too

Embiid, Curry, Antetokounmpo, Paul and others miss out

Jokic claimed the award amid stiff competition. Philadelphia 76er Joel Embiid, a more traditional and powerful center who plays closer to the rim, was second in the voting, with the Golden State Warriors' lethal guard Stephen Curry third. The 2019 and 2020 winner, Giannis Antetokounmpo, placed fourth, ahead of veteran Phoenix Suns playmaker Chris Paul.

Other world-famous names like LeBron James and Kevin Durant were also in the running. And another young star from the Balkans, Dallas Maverick Luka Doncic from Slovenia, has staked his claim as a likely future MVP during the course of this season.

Jokic and Paul's teams are facing each other presently in the Western Conference Playoffs, with the Phoenix Suns taking the first game of a best-of-seven series against the Denver Nuggets on Monday.

"I'm so happy and respect so much the hard work and dedication that he's put in to reach this point," Jokic's coach, Michael Malone, said in a statement. "I've been lucky enough to coach Nikola his entire career, and to see his growth from a second-round pick trying to learn the NBA to a perennial All-Star and now the MVP is truly extraordinary. He deserves this honor and I don't take for granted getting to coach a player, and more importantly a person like Nikola."