A campaign in western Sierra Leone and a ban on public celebrations during the end of year holidays are the latest efforts to combat Ebola. The country has overtaken Liberia as the worst hit by the virus. 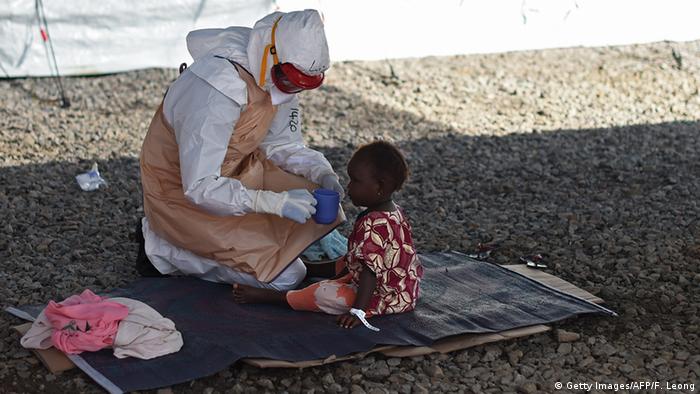 Announcing the program earlier this week, Sierra Leone's President Ernest Bai Koroma said the door-to-door campaign would start on Wednesday (17.12.2014), with teams advising the population and searching for sick people so they could be transferred to medical facilities.

In a statement Tuesday, Koroma said "Operation Western Area Surge" would last until December 31. It was not clear if people had to stay in their homes and, if so, for how long.

More than half of new infections are occurring in the capital, Freetown, and its surrounding areas in the western, coastal areas of the country.

Sierra Leone has overtaken Liberia as the country with the highest number of Ebola infections. Last week the government announced a nationwide ban on public Christmas and New Year festivities.

The head of the Anglican church, Archbishop of Canterbury Justin Welby, was in Freetown this week to meet with people affected by the outbreak. He said he was "overwhelmed" by the people he met who have suffered from Ebola.

UN Secretary General Ban Ki-moon is expected to travel to Liberia, Sierra Leone, Guinea and Mali later this week to review international efforts to tackle the worst outbreak of the disease, which has left more than 6,800 people dead this year.

Some 18,500 people have been infected since last December, the vast majority of cases in Sierra Leone, Guinea and Liberia.

Local health systems have been overwhelmed, with too few doctors and nurses available to treat those infected. Hundreds of foreign health workers have volunteered to go to the three countries to support treatment efforts. On Tuesday the African Union said 187 health workers from Ethiopia were due to arrive to start work. The AU has promised a thousand people from its member states to help in the fight against the virus.

While researchers are working to find an effective treatment for the virus, there is still no curative medicine available. Liberia has begun treating Ebola patients with serum therapy - a treatment made from the blood of recovered survivors.

Scientists in the US, UK and Canada are testing different kinds of vaccine in controlled clinical trials with the of aim of having 20,000 doses for use in West Africa by early next year.

Guinea's capital Conakry has also banned public Christmas and New Year celebrations to combat the spread of the Ebola virus. Only about 10 percent of Guinea's predominantly Muslim population is Christian but many people join in year-end celebrations, whatever their beliefs.

"Large-scale gatherings in public places are suspended for the moment," Conakry governor Soriba Sorel Camara announced in a statement. Beaches will remain closed and firecrackers and fireworks are also banned, he added.