The German Red Cross has opened a new Ebola treatment center in Liberia's capital. The organization is getting support from the German armed forces. 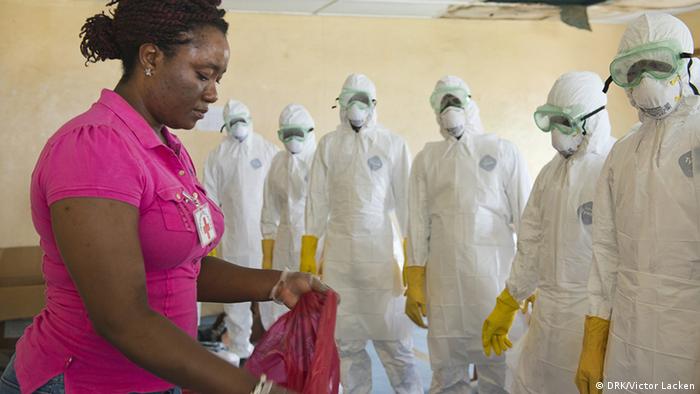 The first day at Liberia's new Ebola treatment center might have gone by without major disturbances, but it involved heavy work for Red Cross staff member Christian Schuh and his team.

"Today, we were able to take over the hospital and the technical equipment. We also started to bring in medical supplies, and we practiced procedures which are necessary in order to run this treatment center without errors," Schuh told DW.

And there's not much time left for the center in Liberia's capital if it wants to start taking in patients before Christmas.

West Africa has been suffering under the Ebola epidemic for almost ten months now, and the plague has had a devastating impact. According to the World Health Organization (WHO), more than 6,500 people have died in Guinea, Liberia and Sierra Leone. These three countries have seen 18,188 infections.

But there is also good news. The WHO has said that in Liberia, cases of Ebola infections dropped massively between mid-September and mid-October. Now there are around twenty new infections per week.

"The rate of new infections is very stable at the moment, but we don't know what will happen in the following days or weeks," Schuh says. "And we are working with high pressure so that our treatment center can operate soon. We want to be ready if the number of cases rises again." 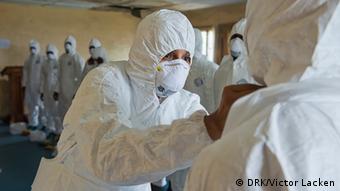 In order to achieve that, 15 volunteers from the German Red Cross and 27 members of the German armed forces came to work in Liberia and to train the local nursing staff. Their training program focuses on security and sanitary measures.

Colonel Salvatore Schmidt, one of the doctors who works for the German armed forces, explains that so far it has been an outstanding cooperation.

The opening of the new treatment center was supposed to take place in November. But the transmission to the Red Cross was postponed two times.

NGOs, particularly the smaller ones like the International Search and Rescue (I.S.A.R), are happy about this new support in the fight against Ebola.

"Bigger NGOs have more capacity to treat people," says Thomas Laacksmann, who works for I.S.A.R His company has also build isolation wards - two of them in Monrovia - where about 60 patients are being treated at the moment.

The new Ebola treatment center by the German Red Cross will eventually be able to give treatment to about 100 patients.

A campaign in western Sierra Leone and a ban on public celebrations during the end of year holidays are the latest efforts to combat Ebola. The country has overtaken Liberia as the worst hit by the virus. (17.12.2014)

The Red Cross has warned of a possible rise in Ebola cases in West Africa during the holiday season. The organisation urged people to be vigiliant if they are planning to travel over Christmas and New Year. (11.12.2014)