Weibo, China’s answer to Twitter, has seen better days. A new rule by the government requiring real name registration could be the last straw and end in death by censorship, says DW columnist Frank Sieren. 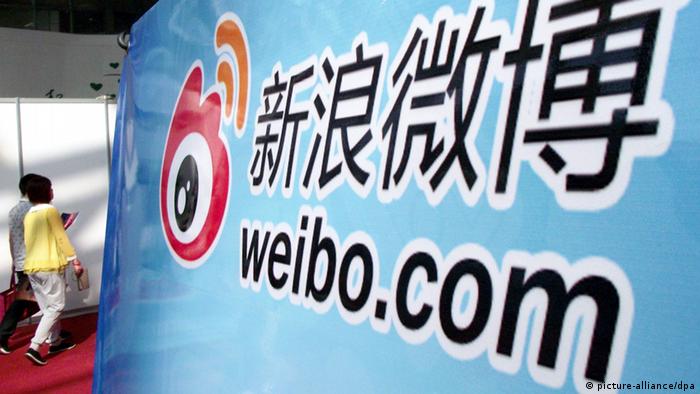 Weibo, it seems, makes the Chinese government a little uneasy. As of Monday, users will have to register using their real names.

This would maybe make sense in Germany, a country which believes in free speech, so that users who post whatever they like can't hide behind user names. But in China, where it's not always clear what the government tolerates and what it doesn't, the move is highly constraining and will inevitably bring about a further drop in user numbers, which have been in decline for over a year. That's precisely what Bejing wants: to tighten the shackles of censorship.

Henceforth, users can only resort to a user name once the authorities have their personal data. The government obviously wants to know exactly who it's dealing with, even if other users don't.

An offensive post can result in a visit from the police. Initially, the censorship police targeted high-profile users such as famous musicians, actors and artists, ensuring that their posts became as innocous as possible. Now, they've set their sights on common, or garden variety, users.

But like everyone else all over the world, Most Chinese don't use social networks to comment on political events or start a revolution, but to show their friends what great lives they lead, posting photos of dinners with friends and exciting holidays.

Now, if they're not careful, they could suffer the same fate as the 16-year-old boy recently arrested because he wrote on Weibo that "government officials shield one another."

Not only censorship is threatening Weibo's future. Its rivals pose another threat; chief among them, Tencent, whose successful Smartphone app WeChat has been a thorn in Weibo's side for a number of years.

Whether users like voice messaging or sharing photos and videos, WeChat is a lot more user-friendly than Weibo. Many Weibo users made the switch, which is why last year, only 331 million were left of the 500 million registered accounts it had in 2013. The drain is continuing, with user numbers now down to 275 million, 60 percent of whom have never even posted anything. 94 percent of content on Weibo is generated by 5 percent of users. Such statistics suggest a platform that's lost its appeal with netizens and is very definitely on its way out.

By contrast, WeChat is thriving. Over 400 million people use the service already and more are signing up all the time. For anyone living in China and wanting to get into contact with Chinese people, it's a must. What Weibo may have missed out on, WeChat has long since achieved: The messaging service also has 110 million fans outside of China. So now US competitor WhatsApp, the fastest growing Internet service ever that boasts 700 million active users, has a serious rival. Facebook bought up WhatsApp just a year ago for 15 billion euros.

For now, WeChat has the edge on WhatsApp because it allows users to conduct normal and video telephone calls for free. And you don't need to type messages - you can just speak them. This is why US car manufacturer Ford is looking into a cooperation with the Chinese that should make it possible to chat without taking your hands off the steering wheel. In China the question of how to stay connected while driving is more important than the power of the engine.

Tencent is continually improving its software. It's already possible to pay at the supermarket checkout or on the Internet. That WeChat also has its nose ahead in this area was illustrated once again during the Chinese New Year festivities last week. At New Year, the Hongbao tradition in China involves putting money in red envelopes and giving them to friends and relatives. Since last year it's possible to do this electronically. This year this service was used a billion times. Although Alibaba offers the same service with Weibo, Tencent managed to secure better partner contracts, for example, with state television CCTV, which broadcasts an annual New Year's show watched by 700 million viewers.

But the government prefers WeChat for one reason: In contrast to Weibo, not everyone can see everything, but rather only those in a particular group that users set up or join. And as WeChat is based on telephone numbers, most users are known. This is, however, no guarantee that the government could not in future restrict freedoms at WeChat, too.

Some hate him. But for others, he is a trendsetter, an Internet wizard and a role model. Jack Ma, the founder of China's e-commerce giant Alibaba, is never afraid of breaking the rules, but he makes sure he gets his way. (10.09.2014)

China's online retail giant Alibaba has filed documents for its long-awaited US stock listing. The company's initial public offering into the US market is widely expected to be one of the largest in history. (07.05.2014)