The president has tried to focus attention on China after he failed to adequately address the pandemic in this US election year. This strategy could pan out for him at home — but nobody is fooled in the European Union. 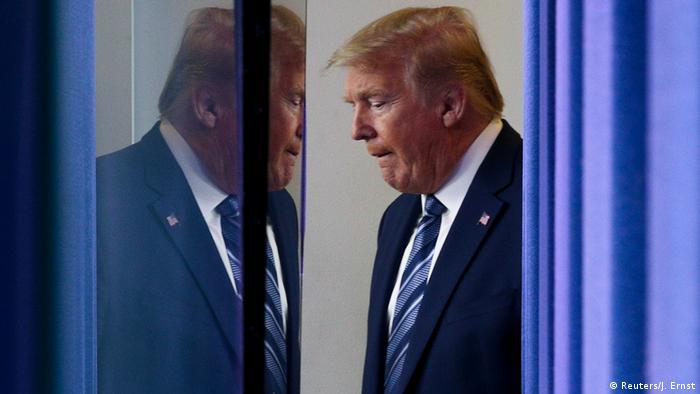 At the end of January, President Donald Trump praised China's handling of the coronavirus outbreak, tweeting that US officials appreciated the country's "efforts and transparency." At the time, the virus was still China's problem. Trump could not imagine what was coming.

By attempting to blame China for the virus's spread, Trump is trying to deflect attention from his own shortcomings in confronting the pandemic and the fact that he wasted precious weeks ignoring the warning signs. He recently said China would have to face consequences if officials were "knowingly responsible" for the pandemic.

This was a guarded reference to the initial days of the outbreak, when China's repressive state machine clamped down on doctors, journalists and whistleblowers who wanted to warn others that the highly contagious novel coronavirus had appeared. It was also a hint at a conspiracy theory that the strain had escaped from a Wuhan lab during experiments, although evidence points to it having occurred naturally and most probably having originated in bats.

Though EU politicians say there needs to be a review of the origins of the pandemic, their criticism of China has been restrained and accompanied by indications that cooperation is their goal. Aware of China's importance for the global economy, EU states are unlikely to let Trump set the tone, particularly countries such as Italy and Spain, which depend on China at the moment for medical aid.

Dominic Raab, who was deputized to fill in while British Prime Minister Boris Johnson recovered from COVID-19, said China would face "hard questions" about the source of the novel coronavirus.

French President Emmanuel Macron told the Financial Times that "there are clearly things that have happened that we don't know about."

German Foreign Minister Heiko Maas said Chinese officials would need to demonstrate their commitment to transparency — especially after the authorities revealed that the number of deaths in Wuhan was considerably higher than previously reported. "These are all questions that need to be answered," Maas said, "and I assume that China, as it is publicly represented, will play a constructive role in this."

Read more: IMF appeals for billions in aid to Africa during pandemic

Trump's announcement that the United States would suspend its financial contributions to the World Health Organization also did not go down well in the European Union. Chancellor Angela Merkel, who has been reticent to criticize Trump's handling of the coronavirus pandemic openly, said the WHO was an indispensable partner for Germany.

Though Trump might be a little annoyed at the lack of success for his anti-China campaign, it will not likely damage him domestically: After all, what he's doing is attempting to create an external enemy to rally voters at home. He's hoping that voters will elect the candidate who dares to defy China — a strategy that unfortunately could work out for him.