Siemens banks on Mexico for business | Business | Economy and finance news from a German perspective | DW | 15.02.2017

Siemens banks on Mexico for business

The German industrial conglomerate has announced a multi-million euro investment in Mexico, saying it is one of the 'most interesting markets' despite recent anti-Mexican rhetoric by the new US president Donald Trump. 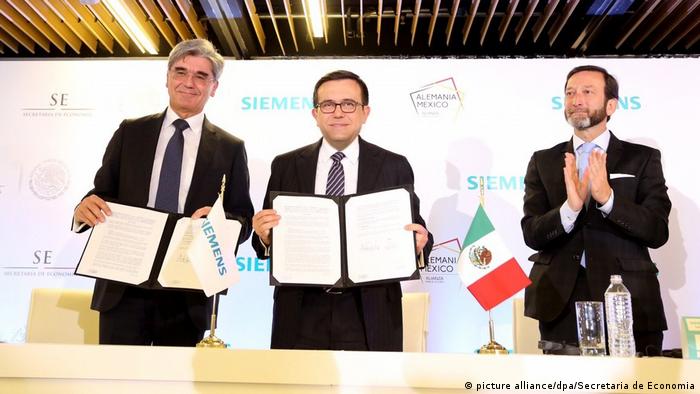 The two sides signed a memorandum of understanding for the delivery of oil sector equipment to be sold by Siemens to state-owned Mexican company Pemex. Last year, Mexico began to deregulate its oil industry allowing foreign companies to invest.

The German industrial conglomerate has reported a 25-percent rise in quarterly net profit, boosting full-year earnings and improving the outlook for 2017. But the firm fears for its US business because of Donald Trump. (01.02.2017)

The German engineering giant will be engaging in funding and building infrastructure projects worth billions of euros, saying the new government of Mauricio Macri is serious about reforming Argentina's economy. (15.09.2016)

A visionary inventor and ambitious entrepreneur, Werner von Siemens was born exactly 200 years ago. Today Siemens is a German company known for both its groundbreaking innovations and its global scope. (12.12.2016)

"[With the investment] we underscore our commitment to Mexico," CEO Kaeser said, adding that the country could "count on Siemens."

Mexico has been under pressure from the Trump administration who blames the country for de-industrializing America by attracting US companies by offering low wages and poor working standards. Washington has vowed to curb massive imports from the country by slapping a border tax on products made in Mexico.

CEO Kaeser was critical of the moves planned in Washington, noting that "trade brings freedom and well-being for all."

The German engineering giant looks back at more than 100 years of doing business in Mexico and currently runs nine plants, two logistics centers and a research division in the country. Its business there grew by 41 percent and 32 percent in 2015 and 2015 respectively.

Siemens' Mexico chief Louise Goeser said the country was "one of the most interesting markets" because Mexico was "competitive, with a huge potential for growth."

Apart from Mexico's oil industry, Siemens eyes additional contracts from the renewables sector as the country aims to generate half of its electricity from wind and solar energy by 2050.