Shootout in Seville: Europa League glory for Eintracht Frankfurt after victory over Rangers 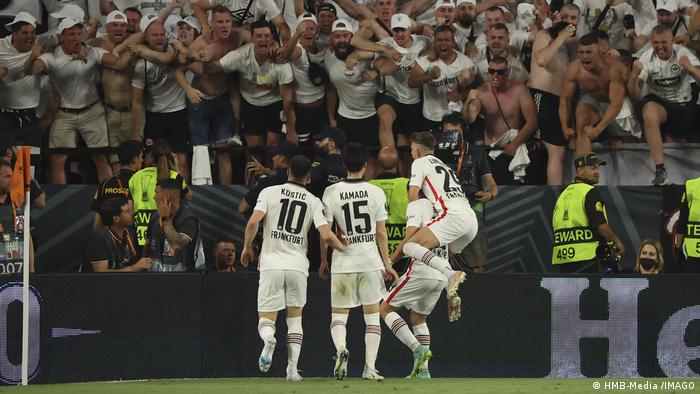 Three years after their penalty heartbreak in the semifinal against Chelsea, Eintracht Frankfurt found redemption in Seville, beating Rangers in a shootout to win the Europa League.

With the teams tied at 1-1 at the end of normal time and extra time, Rafael Borre converted the winning penalty in the shootout to secure Frankfurt's first European triumph since the UEFA Cup in 1980 - but goalkeeper Kevin Trapp was the hero with a spectacular save late in extra time and another stop in the shootout.

But more than the financial boost, Eintracht's triumph in Europe's second club competition represents the delirious climax of a journey which began with a relegation playoff against Nuremberg in 2016, when they stayed in the Bundesliga by the skin of their teeth.

They reached the German Cup final in 2017, losing to Borussia Dortmund, but returned a year later to beat Bayern Munich. The next season, the unstoppable "Buffalo Herd" of Ante Rebic, Luca Jovic and Sebastien Haller took them all the way to that Europa League semifinal against Chelsea, backed every step of their way by their fanatical supporters.

That campaign ended in disappointment, but not this time. This time, a new side under Austrian head coach Oliver Glasner has gone all the way. 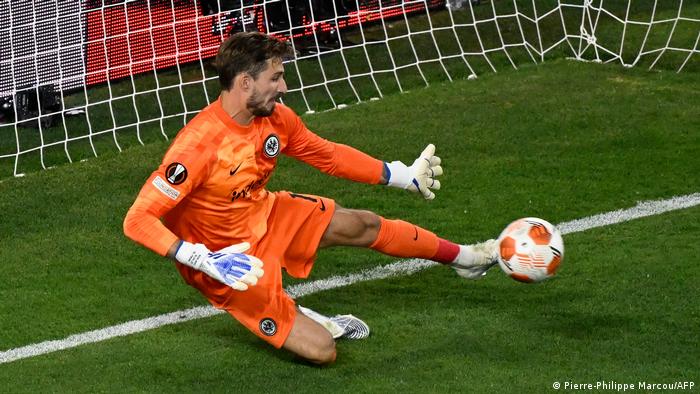 Over 120,000 supporters of both teams descended upon Seville, far outweighing the 10,000 tickets allocated to each club, and indeed the full 44,800 capacity of the Estadio Ramon Sanchez Pizjuan, the home of FC Sevilla, four-time winners of this competition in recent years.

By kick-off, Rangers fans were in the majority inside the stadium, most "neutral" tickets having seemingly fallen into Scottish hands on the black market, where prices of over €1,000 were reported. But the Frankfurt contingent, clad all in white as they have been on their travels throughout this tournament, were louder as their team took control in the first half.

After Rangers' John Lundstram somehow avoided a card of any color for a high challenge which left Frankfurt captain Sebastian Rode with a bloody head wound early on, Eintracht registered 11 shots to Rangers' three before half-time.

Ansgar Knauff cut in from the right but saw his shot saved, Jesper Lindström scuffed an effort from a corner and Filip Kostic dragged an effort wide after leading a solo counterattack from his own half.

But they failed to make the breakthrough and Rangers, who had started nervously both on the pitch and in the stands, came out for the second half with renewed confidence. And so, after Lindström saw an effort deflected just wide, and after a Frankfurt penalty claim was waved away, Rangers pounced.

Djibril Sow failed to clear a long ball, suceeding only in flicking it onwards towards his own goal where Tuta slipped, allowing Joe Aribo to sneak in and score in front of an ecstatic Scottish contingent.

Now it was Frankfurt who looked rattled - but they were able to call upon a trusted source of inspiration when they needed it. For the 15th time this season, Kostic provided the assist - a typically pinpoint cross from the left. And for the 12th time this season, Rafael Borre scored, nipping in between two defenders at the near post.

After regular and extra time ended at 1-1, it was time for Trapp and Borre to take center stage and win it for Frankfurt in the shootout.

Europa League: RB Leipzig one step closer to a second final — but would a trophy bring acceptance? 29.04.2022

After victory over Rangers, RB Leipzig are one step closer to reaching their first-ever European final. The club hope a trophy might legitimize their place in German football, but are there some things money can't buy?

Eintracht Frankfurt’s win over West Ham in the Europa League semifinals secured them a place in a first major final for 42 years. It’s about time this football club was introduced back to the continent’s biggest stage.