Shooting stars: What we know and still need to find out about the Perseid meteor shower | Science | In-depth reporting on science and technology | DW | 10.08.2020

The Perseid meteor shower is as regular as clockwork. It peaks August 12, same as last year. This time we can expect to see twice as many shooting stars, perhaps even a "double peak." But there's loads we don't know. 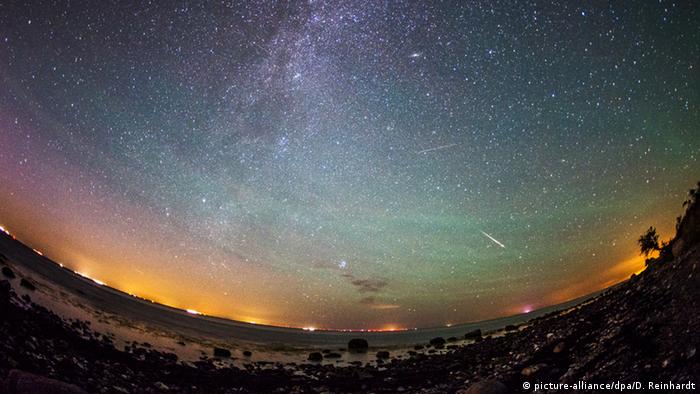 You could almost set your watch by it. The Perseid meteor shower is an annual event, about as regular as Christmas. The precise dates can vary depending on the relative positions of the Earth and the sun or if it's a leap year, but it's reliable.

So we're as certain as science that the Perseid meteor shower peaks on August 12, and for more than a week we can expect to see spectacular things like bright lights and shooting stars in the northern night sky.

These shooting stars, as magical as they may appear to be, are caused when the Earth passes through a stream of dust and rocks - meteoroids - left behind by the comet Swift-Tuttle as it orbits the sun.

When you see a shooting star, you're seeing a meteoroid clash with the Earth's atmosphere and then burning up. This causes a short-lived trail of light called a meteor. The lucky ones survive our atmosphere and land to become meteorites.

It fascinates us year in, year out.

"The Perseids have a large number of bright meteors, many of which leave persistent trains," says Dr John Mason of the British Astronomical Association, "and people like to watch it on a warm summer's evening." 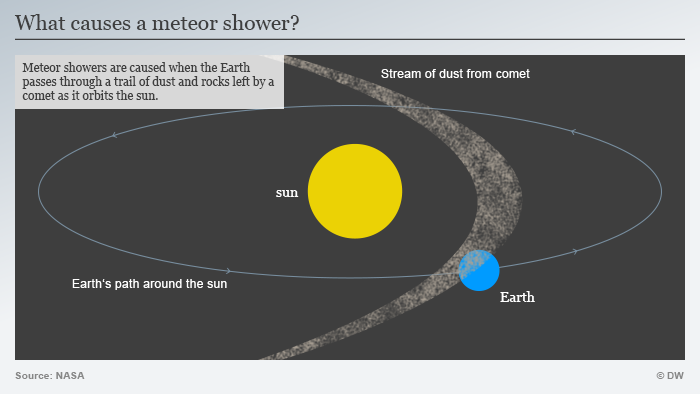 "I'm curious to see whether that really turns out to be true," says Koschny. "If you ask: How many there are in absolute terms?… that's a problem."

Comet Swift-Tuttle is known formally as 109P/Swift-Tuttle. It was discovered in 1862 and has an orbital period of around 130 years. The last time it flew past the Earth was in 1992.

When the comet passes, it lays down dense filaments of dust on its orbit. Each layer holds a wealth of knowledge about the universe.

We know, for instance, that interplanetary dust particles can be rich in sodium.

It is even possible to date the dust using computer models.

"[They model] the comet as it evolves over thousands of years and work out the precise position of each dust filament laid down every 130 years. And then they look at how the planets perturb those dust particles, and they can work out when we will pass through those particular dust trails," Mason says.

Scientists say the comet created the Perseids meteor shower because it appears to originate from the Perseus constellation of stars in the northern sky. The meteor stream is more than a million kilometers across, and the tiny dust grains that make it travel at about 60 kilometers per second. This is why they produce so much energy - they move so fast - and burn so bright when they hit the Earth's atmosphere.

Why we need to know more

So we know a fair bit about the Perseids, and yet there is more we need to know.

First, it's basic science. Meteoroids come from comets, and comets - and other celestial objects like them - are about the closest we'll ever get to the big bang.

"If we find traces of organic material in a meteoroid, then we can understand a bit better how life came on Earth," says Koschny. 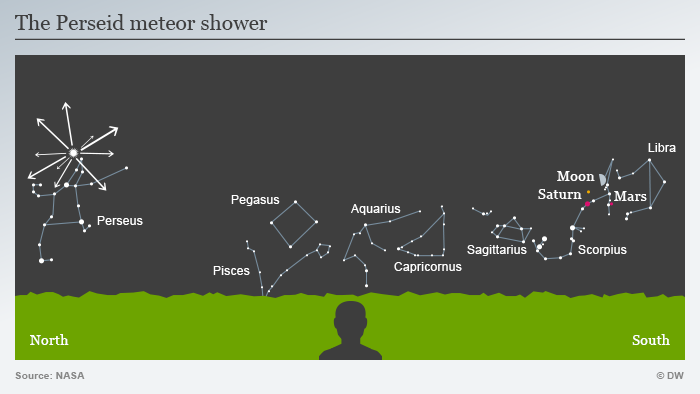 But we also need to understand more about the distribution of dust in the solar system because these tiny objects pose a threat to our spacecraft.

"When one of these particles hits a spacecraft, it can generate an electric charge, a little plasma cloud, and that can shortout a satellite," says Koschny. "[Satellites] are very sensitive and not grounded like all the equipment on Earth. So a change in the electrical potential can do damage."

Then there's that matter of absolute numbers. It's only been the past five to 10 years that scientists have tried to predict the numbers of particles, to estimate how many shooting stars we see. But it's still very "relative," says Koschny.

"A model may predict [...] 200 per hour and then people go out and see 50 per hour, or the other way around," says Koschny. "So that's what everyone is working on now, what we call the flux density."

Koschny is currently working on a paper he hopes will provide new answers. And not just so we know how great the annual spectacle will be.

"It's very relevant for this impact threat to satellites," he says. "The spacecraft operators want to know whether there's a chance of being hit once a year or once every 10 years."

How space-based observation could help

Speaking of satellites raises the question why so much observation is done from Earth. If we need to learn more about meteoroids, shouldn't we get to them before they burn up?

"For a long time, we've been trying to get cameras into space that observe meteors too," says Koschny. "Even better would be a camera permanently recording the sky, looking down, say, from a space station. And if I add a spectrograph, an objective grating in front of my camera, I get a spectrum, and I can ascertain the chemical composition of the object, and that tells us what it is made of."

All you would need is a "simple" video camera, recording at 25 frames per second to pick up movement, and a two-dimensional sensor.

John Mason agrees there are advantages to space-based observation, but he has reservations.

"What we can't do from the ground is collect the dust grains and analyze them before they reach the atmosphere, as opposed to observing the luminous trails in the atmosphere from above," says Mason. "But you wouldn't need a camera to do that. There are lots of dust particle detectors that have flown on many other cometary missions, which would do the job very well."

A firework of shooting stars or just celestial peanuts?

How many shooting stars have you counted recently? Did you expect too much from the Perseids? We looked into data from recent years - and now we know how strong a Perseid shower is really supposed to be. (14.08.2015)

This Monday Mercury passes between the sun and Earth. For seven hours, the planet will be visible as a little black dot - but never look directly at it or the sun! Here's what else you need to know. (06.05.2016)