Shkodran Mustafi to Schalke: Nothing left to lose?

Just a few years ago, Schalke were Champions League regulars and Shkodran Mustafi was starting for Germany at major tournaments. Now the defender has joined the Royal Blues with both at rock bottom. A perfect match? 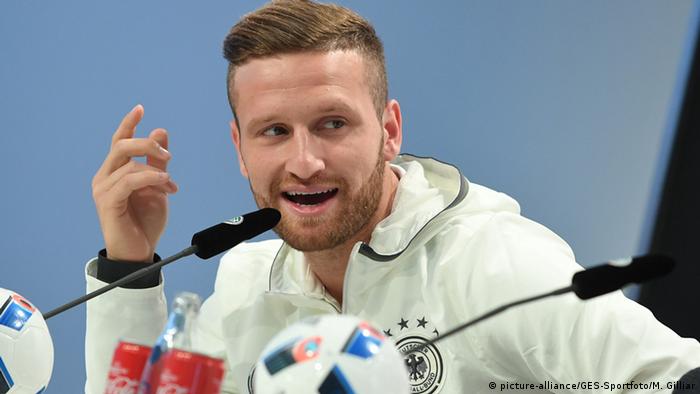 "He’ll keep that record going at Schalke," quipped former Arsenal playmaker turned pundit Paul Merson, when he learned of Shkodran Mustafi's deadline day move to a club who have won just one Bundesliga game all season and sit nine points clear of safety.

On the same day that Schalke's perilous finances forced them to allow Ozan Kabak to join Liverpool, initially on loan, they signed a 28-year-old replacement center back who won the World Cup with Germany in 2014 and played at Euro 2016 to little fanfare or excitement outside the club.

"You have to look at this transfer from two perspectives. Ozan Kabak leaving Schalke 04 makes a lot of sense financially, especially due to the effects of the coronavirus pandemic," said Jochen Schneider, the club's head of sport and communication. "On top of that, we believe that we’ve signed a very good center back in Shkodran Mustafi, who will fill the gap that Ozan will definitely leave."

Merson's dismissal of Mustafi is par for the course in England, where the German defender has become a figure of ridicule in recent years after a €41 million move to Arsenal in 2016 that has gone from unspectacular to nightmarish.

"For people who look from the outside, they only see this particular scene where this error happens and then they're angry at you," he wrote in a heartfelt open letter to Arsenal fans a year ago. "You become nervous yourself because you don't want to make these errors again. It was difficult at this time to handle all the pressure."

Much like his compatriot and fomer teammate Mesut Özil, who also moved away in January, Mustafi has been frozen out by Arsenal boss Mikel Arteta. He's played just 43 Premier League minutes this season after a decent run in the side at the back end of the previous campaign.

Though his lack of action will likely mean a lack of sharpness, the dire situation Schalke find themselves in, both in terms of points and personnel, may well mean he is thrown straight in to Bundesliga action.

Whenever that debut comes, it'll be the first time Mustafi has played professional club football in his native land, having moved from Hamburg's youth team to Everton over a decade ago. Impressive spells in Serie A with Sampdoria, and particularly in La Liga with Valencia, followed before the ill-fated move to north London.

Despite his struggles at Arsenal, Mustafi was an important figure in their FA Cup win last year, starting both the quarter and semifinals, and has the pedigree to improve the Bundesliga's worst defense, if not the form right now.

"I hope very much that he can find his rhythm and be important on the pitch. Then Mustafi is an absolute asset," said Schalke board member, and former head coach, Huub Stevens to German broadcaster Sport1 on Tuesday.

At his best, Mustafi is strong in the air, reads the game well and can organize effectively. He'll also be linking up with recent teammate Sead Kolasinac, who rejoined Schalke from Arsenal earlier in January and the German should have few problems adapting.

Though he'll need to settle quickly, with fixtures against RB Leipzig, Union Berlin and the Ruhr derby against Borussia Dortmund coming up in the Bundesliga, some of the pressure Mustafi admitted to struggling with has been released; by leaving England, by virtue of his lowered reputation and by the seemingly hopeless nature of Schalke's position.

Most deadline day signings are a gamble and, with Schalke's finances, any deal at any time must also regarded as such. But, in reality, neither party has much to lose and, though it's very much a long shot, both have plenty to gain.