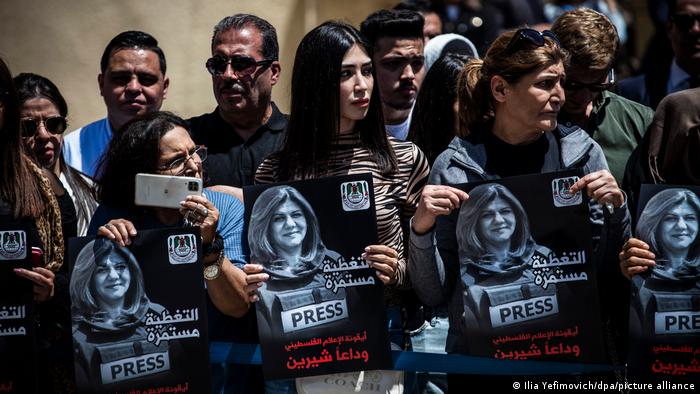 Journalist Shireen Abu Akleh was honored at a memorial service in the West Bank city of Ramallah on Thursday, amid calls for an independent probe into the reporter's death.

The 51-year-old Palestinian-American died on Wednesday after being hit by gunfire while covering an Israeli military operation in the city of Jenin.

Al Jazeera and witnesses at the scene, including a fellow Al Jazeera reporter and a photographer for the Agence France Press (AFP) news agency, said she died as a result of Israeli gunfire. The Qatar-based broadcaster said in a statement that Abu Akleh was targeted "deliberately."

Israel 'not certain' who is responsible

Israel has called for a joint-investigation and said it was unclear who was responsible.

On Wednesday evening, Israel's Defense Minister Benny Gantz said it could have been "the Palestinians who shot her" or that the fire came from "our side."

"We are not certain how she was killed but we want to get to the bottom of this incident and to uncover the truth as much as we can," Gantz told reporters.

Immediately following news of her death, Israel said that a Palestinian gunman might have fired the fatal shot during clashes with the Israeli military, with Israeli Prime Minister Naftali Bennett saying the reporter was "likely" hit by stray Palestinian gunfire.

Her death sparked shock throughout the region, while governments around the world condemned her killing.

On Thursday, Abu Akleh's body was taken to the Palestinian Authority's (PA) presidential compound for an official memorial ceremony in Ramallah.

President Mahmoud Abbas paid his respects to the journalist and dismissed Israel's offer for a joint probe.

"We rejected the joint investigation with the Israeli occupation authorities because they committed the crime and because we don't trust them," Abbas said in the memorial.

He added that the PA "will go immediately to the International Criminal Court" to file a case.

Following Abu Akleh's death, tributes from journalists around the world poured in on social media, with many offering condolences and mourning the loss of a highly-respected colleague who was known for her steadfast coverage of topics in the Middle East.

Calls for an independent probe into those responsible for Abu Akleh's death also gained support from journalist groups and world leaders.

Christophe Deloire, the director general of Reporters Without Borders, said that the organization was "disappointed" with Israel's offer to hold a joint probe, adding that "an independent international investigation must be launched."

UN Secretary General Antonio Guterres said he was "appalled" and urged "the relevant authorities to carry out an independent and transparent investigation" to assure those responsible for the shooting are held accountable, according to a statement from a UN spokesperson.

The European Union also called for an "independent" inquiry.

The United States appealed for a swift probe into Abu Akleh's death, but said Washington would rely on Israel to investigate.

"We call for an immediate and thorough investigation and full accountability," US Department of State spokesperson Ned Price told reporters in a press briefing.

"The Israelis have the wherewithal and the capabilities to conduct a thorough, comprehensive investigation," Price said.

Al Jazeera reported that Abu Akleh's body will be taken to East Jerusalem later on Thursday to a hospital near where her family lives. The burial is expected to take place on Friday.