According to the Qatar-based broadcaster, reporter Shireen Abu Akleh was shot while covering clashes in the city of Jenin in the West Bank. 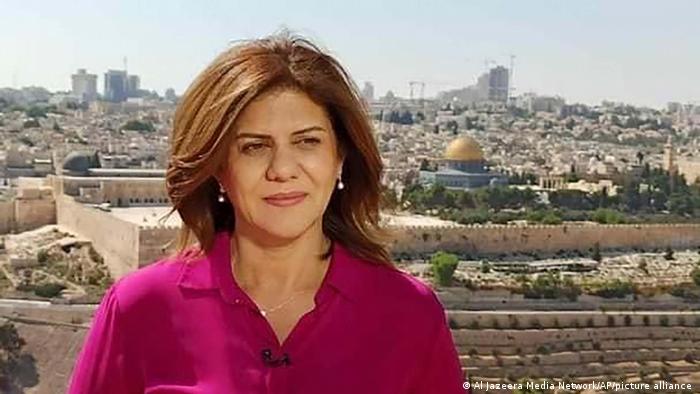 A reporter for the Al Jazeera network died after being wounded while covering clashes in the West Bank, the broadcaster and Palestinian officials said Wednesday.

The broadcaster identified the reporter as Shireen Abu Akleh, 51, who was a prominent figure in Al Jazeera's Arabic news service.

She was also wearing protective gear that identified her as a member of the press, according to the broadcaster.

Al Jazeera, Palestinian authorities, and an Agence France-Presse (AFP) photographer, who was also at the scene, reported that she had been killed as a result of gunfire from Israeli forces.

Israel has said that is is "looking into the possibility that journalists were hit by Palestinian gunmen."

DW's Tania Krämer in Jerusalem said the exact circumstances were "still not clear."

Al Jazeera said another journalist, Ali Samoudi, was also wounded and is in stable condition. Samoudi was working as Abu Akleh's producer when they were both struck by gunfire.

The shooting reportedly took place during an army raid in the West Bank city of Jenin.

Samoudi told the Associated Press he and Abu Akleh were part of a group of seven reporters who went to cover the operation.

All journalists were wearing gear that marked them as members of the press, Samoudi said. He said they walked past Israeli troops to let them know they were on the scene.

"Journalists must be protected in conflict zones and we all have a responsibility to get to the truth," he added in a post on Twitter.

In a statement, Israel's military said it carried out a counterterrorism operation at a refugee camp in Jenin on Wednesday morning in an effort to detain suspects accused of terrorist activities.

During the operation, Israel's armed forces said suspects fired upon Israeli soldiers, who responded with gunfire "and hits were identified."

An investigation is currently underway.

Who was Shireen Abu Akleh?

The US Ambassador to Israel, Tim Nides, confirmed Abu Akleh was a US citizen, in a post on Twitter. He also said he encouraged "a thorough investigation into the circumstances of her death."

She began working for the Qatar-based broadcaster Al Jazeera in 1997 and reported regularly on camera across the Palestinian territories.