A German court has ruled that a group of Islamic extremists who patrolled the streets of Wuppertal in orange vests, bearing the words "Sharia police" can be tried. A Wuppertal district court had dismissed the case. 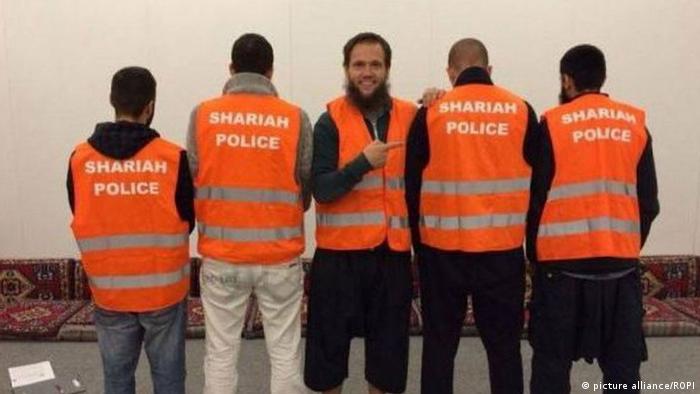 Düsseldorf state court said on Tuesday that eight of the nine accused men can face trial on the grounds of "violating laws against wearing uniforms with political messages."

The decision overturned a ruling by Wuppertal district court last December, in which the judge said the behavior of accused Islamist preacher Sven Lau did not amount to a "criminal violation of the ban on uniforms." The decision sparked controversy in Germany and led to an appeal by prosecutors. The latest ruling by the Court of Appeal cannot be overturned.

Lau, who is widely regarded as a leading figure in the German Salafist scene, was also indicted by federal prosecutors last month on suspicion of supporting a terror group linked to the self-declared "Islamic State" (IS) in Syria.

The Salafists, who are all aged between 24 and 35, first made headlines in September 2014 after they patrolled the streets of Wuppertal, in Germany's western industrial Ruhr region, in an attempt to enforce a strict interpretation of Islam.

The bearded fundamentalists were also observed calling for an end to gambling as they carried notices, in English, declaring a "Sharia Controlled Zone."

At the time of the reports, German Chancellor Angela Merkel commented that no one had the right to do the police's work for them.

Wuppertal Police Chief Birgitta Rademacher said: "Intimidation or provocation won't be tolerated," adding that only police appointed and employed by the state had the legitimate right to act as police in Germany.

Germany has seen a growing Salafist population in recent years, especially in the western state of North Rhine-Westphalia (NRW), where there are currently an estimated 1,800 followers of the ultra-conservative branch of Islam. Wuppertal is Germany's most popular city for Salafists, who preach a very conservative interpretation of Islam and reject any form of democracy.

Mosques across Germany are planning to unite against Islamist extremists this week. The country’s Central Council of Muslims wants to reframe the public debate which has increasingly blurred its rhetoric about Islam. (16.09.2014)

They call themselves 'Sharia police' and 'patrol' the city of Wuppertal. It's bad enough that these Salafists want to provoke people in this form, but stunts like this should be made illegal, says DW’s Volker Wagener. (08.09.2014)

Trial opens for German mother accused of killing five of her children 14.06.2021