Opinion: Stop the ′Sharia police′ together with Germany′s Muslims | Germany | News and in-depth reporting from Berlin and beyond | DW | 08.09.2014

They call themselves 'Sharia police' and 'patrol' the city of Wuppertal. It's bad enough that these Salafists want to provoke people in this form, but stunts like this should be made illegal, says DW’s Volker Wagener. 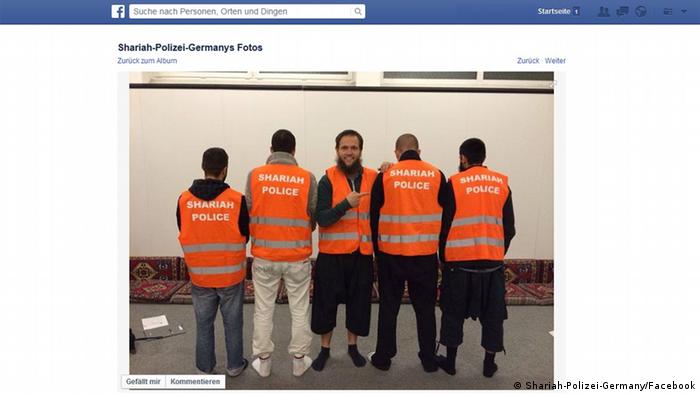 The "Sharia police" have used Facebook to advertise their activity

Wearing orange traffic safety vests, they resembled workers from a road service car repair company - that is, aside from their long beards and the large letters printed on the back of their vests reading "Sharia police." They are Salafists, posing under the guise of being helpful officials to target young Muslims and recruit them for their version of Islam. It may have been a simple provocation, but one should not take jokes like this lightly.

Germany is experiencing a growing Salafist population, especially in the state of North Rhine-Westphalia. There are around 1,800 followers of the ultra-conservative branch of Islam there. Wuppertal is Germany's number-one city for Salafists, who preach a very conservative interpretation of Islam and reject any form of democracy.

This is not in line with Germany's constitution - and it must be stopped as soon as possible. It cannot be accepted that the state's power is questioned or threatened in any way. So, the political reaction to the "Sharia police" stunt has been a correct one. The Sharia vests should be seen as an attempt to impose uniformity - and thus suppress individual freedom - and their daunting, fear-inspiring group appearance in Wuppertal should be seen as a transgression of Germany's basic laws on freedom of assembly.

Naturally, a free state has only limited possibilities to respond to such a transgression. As long as the Salafists don't go any further than provocative proselytizing, they cannot be banned, nor can their members be arrested. The Islamists are aware of how tied the state's hands are in this regard.

The leader of the Wuppertal Salafists is a German who converted to Islam - Sven Lau, alias Abu Adam, is under state surveillance. The former fireman from Mönchengladbach has taken to setting fires of his own. And he is very familiar with the workings of the democratic media. Every little provocation by his Salafists gets his group attention and attracts new recruits.

The "Sharia police" patrol in Wuppertal was definitely an effective propaganda stunt. And in the end, it will play out to their advantage and create the reaction they are aiming for: to foster hate towards the West and provoke a holy war. Salafist content posted on YouTube makes these objectives clear.

Looking for unity with German Muslims

The German state knows ways to identify any crimes committed by the Islamists and keeps a close eye. While that is a start, it is not enough to confront the Islamist threat in the age of the Internet. The lost followers of this violent form of Islam can use the net to spread their message of hate and their interpretation of the religion on a large scale.

Instead of relying on Germany's limited police and judicial responses to these Islamist activities, it would be much more effective to create unity among German's Muslims, the majority of whom reject and detest the Salafist version of Islam just as much as anyone else. After all, just 0.1 percent of German Muslims say they are among the Salafists. This would also be a very concrete attempt at improving integration policies.

The German government has strongly criticized nightly patrols in the city of Wuppertal by men calling themselves "Sharia police." The 33-year-old behind the patrols claimed that their goal was only to raise attention. (06.09.2014)