Mosques across Germany are planning to unite against Islamist extremists this week. The country’s Central Council of Muslims wants to reframe the public debate which has increasingly blurred its rhetoric about Islam. 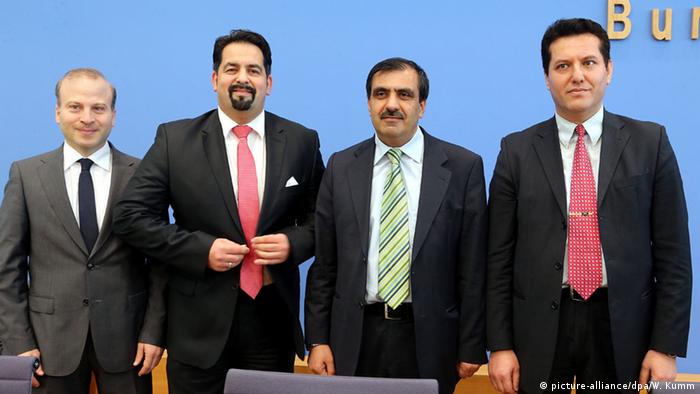 Speaking to at a news conference in Berlin on Tuesday, Muslim leaders from around Germany announced a nationwide demonstration on the misrepresentation of Islam.

"[Germany] doesn't exactly have a great relationship when it comes to Muslims," the chairperson of the Central Muslim Council, Aiman Mazyek (pictured second from left), told reporters.

The rise of Islamist extremism abroad and its ties to Germany have tarnished the reputation of the Muslim community, the council, the Association of Islamic Cultural Centers and the Turkish-Islamic Union argued on Tuesday.

In recent weeks, the national debate has focused particularly on combating the "Islamic State" (IS) in Syria and Iraq. Late last week, the German Interior Ministry announced a ban against all IS activities. Violations of the ban included participating in IS demonstrations, showing support for the jihadist group on social media platforms or wearing any symbols affiliated with the extremist fighters.

The central council of Muslims has also condemned recent fundamentalist activities, accusing them of "perverting the name of [Islam]." Earlier this month, a number of civilians calling themselves the "Sharia police" began patrolling the streets of the western city of Wuppertal, located roughly 50 kilometers (31 miles) northeast of Cologne.

"The action day should be a sign of accord in society," Mazyek stressed.

Berlin, Hamburg, Stuttgart, Frankfurt, Cologne, Munich and Bielefeld, along with roughly 2,000 other cities are to hold events on Friday. German Interior Minister Thomas de Maiziere is to attend the demonstration in Hanover, according to the central council.

'Terrorists' do not speak for Muslims

On Tuesday, Mayzek emphasized that the public needed a reminder that Islam was a religion of peace.

"We want to make clear that terrorists do not speak in the name of Islam," Mazyek stressed.

A number of houses of worship have come under attack over the summer in reaction to the Middle East conflicts. Not only have synagogues and Christian churches been attacked, but also mosques.

"I am a Jew when synagogues are attacked," said Mazyek. "I am a Christian when Christians are persecuted for example in Iraq. And I am a Muslim when firebombs are thrown at their places of worship," the council spokesperson said.

"As a society we have to stand together."

Similar demonstrations have occurred in recent days. On Sunday, the Jewish community spoke out against anti-Semitism in Berlin. While German Chancellor Angela Merkel and members of cabinet joined the demonstration, critics noted the low turnout for the high-profile event.