Shadow of Kyoto looms over final day of climate talks | Environment| All topics from climate change to conservation | DW | 10.12.2010

Shadow of Kyoto looms over final day of climate talks

A new treaty to combat climate change is not going to emerge in Cancun, but the conference could see breakthroughs on forestry and finance, provided a dispute over Kyoto doesn't derail the last day of talks. 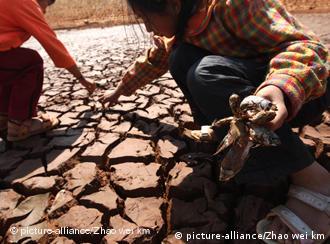 Accusations of "brinkmanship" are dominating climate talks as they enter their final day in Cancun, Mexico.

Although no over-arching treaty to tackle climate change is up for grabs this year, struggles over principles risk progress on smaller achievements in the final hours of negotiations.

Japan's hard line on the Kyoto Protocol remains the main concern for parties trying to bridge differences on a range of issues, including forestry protection, climate finance and accounting methodologies. 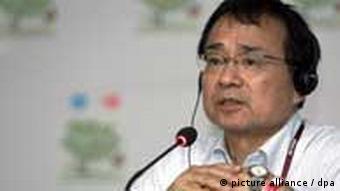 The Japanese delegation has come in for criticism

Japan has refused to climb down from its refusal to consider extending Kyoto when its first commitment period expires in 2012, despite openings for compromises throughout the talks.

"We know that European Union countries insist on a second commitment period, but we think this isn't a fair way of dealing with emissions globally," said Japanese negotiator Akira Yamada on Thursday evening, describing this dispute as "ongoing" and "difficult."

Kyoto binds 37 wealthy nations to cut their greenhouse gas emissions, but Japan does not want to be part of an agreement that doesn't include binding rules for the world’s top two emitters, China and the US.

Developing countries see Kyoto as crucial for holding the industrialized world to account for a problem that is mostly of its making.

It seemed that a crisis over Kyoto might be avoided earlier in the conference, following conciliatory language from China and India, but by the end of the week environmental groups were naming Japan as the "worst" participant at the talks.

"They should show more flexibility and not pick a fight where it is not necessary," said David Turnbull, executive director of the Climate Action Network, an umbrella group of environmental organizations.

Yet harsh criticism has also been leveled at certain developing countries, among them Brazil, amid fears that even lesser gains may slip through negotiators' fingers in Cancun.

Brazil has been widely applauded for how it is tackling the destruction of the Amazon. Indeed, last week it announced that its rate of deforestation dropped 14 percent over a 12-month period in 2010, to reach its lowest level on record.

Yet environmental groups accused Brazil on Thursday of rolling back gains in discussions on forestry protection measures because of its resistance to a system with international checks. 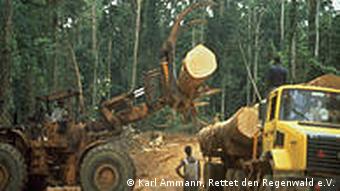 Global deforestation rates have slowed over the last 10 years

Don Lehr, a spokesperson for the Eco-Systems Climate Alliance, described talks on forestry on Thursday as deadlocked.

"If we are not going to break down the sovereignty issues, we’ll never deal with climate change," said Rosalind Reeve of Global Witness, an organisation that tracks resource exploitation, in reference to Brazil's position.

"You need a monitoring system that works nationally and internationally to build integrity. There’s two sides to this equation; there’s carbon and there’s safeguards."

Brazil has long been wary of efforts to secure international monitoring commitments in a global system to curb deforestation which would reward conservation in poor countries.

Despite the concerns of countries like Brazil and Papua New Guinea, many have hoped to see Cancun at least achieve an agreement on the scheme known as REDD - Reducing Emissions from Deforestation and Degradation.

That is looking difficult on Friday.

"We are not in favour of monitoring in an international process," said a senior Brazilian negotiator, suggesting that it would simply add excessive layers of bureaucracy that would "overcharge" domestic measures.

Though the situation could change in the final hours of talks, efforts to agree on a fund to help poor countries pay for their response to climate change also appear stalled. 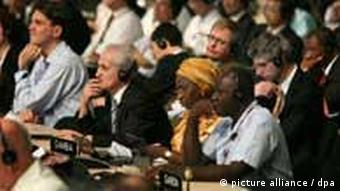 Progess at the talks has been painfully slow

Rich countries pledged in Copenhagen last year to raise $30 billion (22 billion euros) over the next few years to help developing countries already begin to meet the costs of climate change.

Developing countries have expressed dismay that much of that pledged money appears to have been watered down through technical measures.

The fast start finance is supposed to help build trust in rich countries’ pledges to deliver $100 billion dollars annually as of 2020 for a so-called green fund for developing countries, which in turn might make poorer countries amenable to adopting their own binding emissions cuts.

Details of the fund - such as who will have control of it, where the money will come from and the conditions of its use - were supposed to be ironed out in Cancun.

But these, too, appear to remain points of contest as the conference draws to a close.

At the United Nations climate talks in Cancun, German Environment Minister Norbert Roettgen stressed the economic advantages of tackling climate change, by investing in the future. (09.12.2010)

Even assuming all countries makes goods on pledges to cut greenhouse gas emissions, there's still a gap between what scientists say is needed to prevent catastrophic effects of climate change and what's been promised. (08.12.2010)